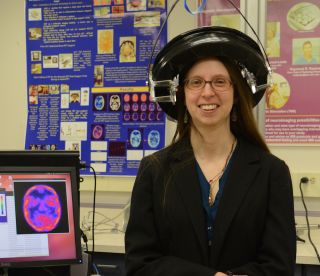 Imagine if you could get a scan of your brain as you went about your day. Soon, that may be a reality — a team of scientists is developing a portable brain scanner that can reveal natural brain activity while a person is engaging in creative activities or social interactions.

Positron emission tomography (PET) scanners use a radioactive substance used by cells (usually a sugar) to image activity in the brain. Traditional PET scanners are very bulky, but the new helmetlike device can be worn on a person's head while he or she is walking around, playing a piano or chatting with friends.

Future studies using the new device could lead to a deeper understanding of healthy brain function, as well as neurological disorders such as dementia, stroke, traumatic brain injury and depression, the researchers said. [3D Images: Exploring the Human Brain]

"Every social experiment that has been done [in a brain scanner] is an artificially contrived experiment," said Julie Brefczynski-Lewis, a neuroscientist at West Virginia University and one of the scientists leading the project. "Here, you can actually see what people are doing when they're embarrassed, when they're laughing, when they're crying."

The wearable scanner concept was patented by Stan Majewski, a physicist currently at the University of Virginia. Brefczynski-Lewis was inspired by the idea, and got together with Majewski and others to build a prototype. The team received one of the first grants from the president's BRAIN Initiative (short for Brain Research through Advancing Innovative Neurotechnologies) — an award of $1.5 million from the National Institutes of Health.

The device they built consists of a ring of tiny PET detectors that fit on a helmet that looks like something out of "Star Trek." The portable, lightweight design will allow researchers to perform experiments such as monitoring the brainof a stroke patient doing rehab exercises, or observing the brain of an autistic person in a social situation, the researchers said.

Additionally, because the device is worn close to the head, it requires a much lower dose of the radioactive tracer chemicals used in all PET imaging — an amount of radiation equivalent to that received during a cross-country flight, Brefczynski-Lewis told Live Science.

The researchers did some preliminary testing of the device with a "fake brain" — a slice of brain injected with the radiotracer chemical — and it worked successfully. The images were a bit fuzzier than typical PET images, but they showed the little bumps and grooves, known as gyri and sulci, found in the human brain, Brefczynski-Lewis said.

The researchers tested the device on two patients whose brains had already been injected with a radioactive glucose tracer for cancer.   The scientists also stuck the PET helmet in an MRI machine, and found that it didn't cause any interference.

The research was presented last November at the annual meeting of the Society for Neuroscience in Washington, D.C.