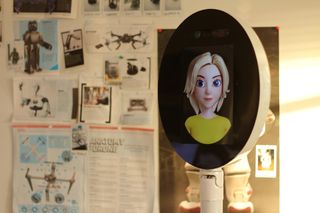 She's a personal assistant, photographer, butler and home security guard all in one — and she's a robot.

Robotbase, a robotics company headquartered in New York City, is developing a personal robot that can perform a variety of daily functions at home or at work— everything from turning on lights to managing social calendars.

The bot can even read a bedtime story to your kids, and adjust the color of the room's lighting based on the story's mood, the makers said. [See video of the personal robot in action]

The first prototype was launched earlier this month at CES 2015 in Las Vegas, and the company has already raised more than $127,000 through a crowdfunding campaign.

"Twenty years ago, personal computers came along and changed everything. Ten years ago, we had the smartphone," said Duy Huynh, founder and CEO of Robotbase. "We look at our product as the next device after the computer and the smartphone."

A variety of robots exist on the market today, yet most of them fall into one of two categories: toy robots or industrial robots, Huynh told Live Science.

"But there's a huge gap in between — the consumer robot," he said. Robotbase wants to build a robot that people can enjoy and feel comfortable seeing around everyday at home and at work, Huynh  said.

The new personal robot has a wide array of capabilities. It can recognize faces and expressions, or recognize objects around the house and navigate around them automatically. If you're hosting a party, the bot can move around and snap candid shots of your smiling guests.

The robot can also recognize speech and respond to requests. The bot can tell you about the news or the weather, play music and schedule meetings, much like Apple's digital assistant Siri. But unlike Siri, the robot uses artificial intelligence to understand what the words mean, Huynh said. For example, users can ask it to do things like order takeout, and it will learn their preferences.

Robotbase's prototype bot is a female avatar named Maya, but its makers are working on creating other customizable faces, names and voices.

"When we launched our Kickstarter [crowdfunding campaign] two weeks ago, we thought we were going to get a lot of challenging technical questions," Huynh said, "but the number one question was, Can I change that face into a guy face?" or "Can I change it into Alfred in 'Batman?'"

To develop the robot's software, Robotbase used a set of machine-learning algorithms collectively called deep learning, which seeks to identify patterns in information and match it to something recognizable, much like the human brain does. Google uses deep learning in many of its products, and demonstrated the technology to great effect in 2012, when it used 16,000 computers to recognize cats in YouTube videos.

The robot runs on the Android operating system, and is designed to be a system for which software developers can build their own apps.

"We are not building a 'product,'" Huynh said. "We want to be a platform."

Robotbase has a working prototype of the robot, and expects to have a commercial model ready to ship by the end of 2015, Huynh said. The company has already taken orders for its first units, priced at $1,000, which sold out in a few days. The second tier of sales is priced at $1,195, or $1,495 for a developer model. The final retail price will likely be between $1,500 and $2,000, Huynh said.

The notion of a personal robot that can film your house and has access to many of your personal preferences and habits may seem disturbing to some. But, Robotbase takes privacy concerns seriously, Huynh said. "We are not going to share that data with anyone else," he said.

Earlier this month, prominent figures such as billionaire entrepreneur Elon Musk and theoretical physicist Stephen Hawking warned about the potential threats of artificial intelligence in an open letter. But Huynh rejects the admonitions.

"I think we are hundreds of years away from [dangerous AI], if it happens," he said, adding that the benefits of the technology are going to outweigh the risks.

More information about the Robotbase project is available on the company's Kickstarter page.