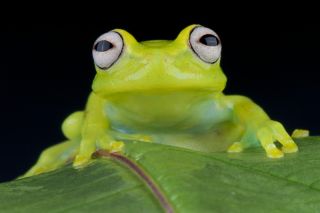 Adorable and fascinating, or slimy and repulsive, frogs are many things to many people. But whether you love Kermit or hate him, he's hard to ignore.

From swallowing with their eyeballs to giving birth to live tadpoles, here are some strange facts about frogs you probably didn't know.

Swallowing, with help from the eyelids

You've probably heard the expression "his eyes are bigger than his stomach," but sometimes, big eyes come in handy — many frogs use their eyeballs to swallow. "Once they have prey in their mouth, to help force it down their throat, they actually pull their eyeballs down," Christopher Raxworthy, a herpetologist at the American Museum of Natural History, told Live Science last year.

No eggs to hatch

Most frogs lay eggs, which later hatch into tadpoles and then eventually develop into adult frogs. But a handful of frog species give birth to live young. Often, the young are miniature frogs called froglets. But a recent study described a species of Indonesian fanged frog that gives birth to live tadpoles.

Giving birth out of their mouths

Frogs called gastric-brooding frogs (of the genus Rheobatrachus) had an unusual party trick. In these two species of Australian frog, females laid their eggs normally, and then the males fertilized the eggs by laying sperm on top of them. [40 Freaky Frog Photos]

But then things got … weird: The female would swallow the fertilized eggs, and her body would shut off the digestive enzymes in her stomach, where the eggs would develop into little froglets. For the final coup de gras, the mother frog gave birth out of her mouth. Sadly, the only two species of this frog went extinct in the mid-1980s, probably because of timber harvesting in the regions where the animals lived, along with an infection caused by the chytrid fungus.

A frog that is called the common Suriname toad, or Pipa pipa, is one of the world's most bizarre frogs. The animal's flattened shape makes it look a bit like a pancake, and it spends its whole life living in water. When the male and female mate, the female releases her eggs and the male catches and fertilizes them. Then, the eggs embed in the spongy tissue of the female's back, which grows over them. When the babies develop into froglets, they burst out of their mother's back, as shown in this video.

The world's largest frog is the goliath frog of West Africa, which can grow to 15 inches (38 centimeters) and weigh up to 7 lbs. (3.2 kilograms), according to the American Museum of Natural History.

In the 1940s, scientists discovered that African clawed frogs could be used to determine if a woman was pregnant. The hormones in a pregnant woman's urine, when injected into the frogs, caused the animals to lay eggs. Between the 1940s and 1970s, hospitals imported the frogs in great numbers. Toads from the Bufo genus were also used, which led to the term "Bufo test." (Modern pregnancy tests no longer require frogs or toads.)