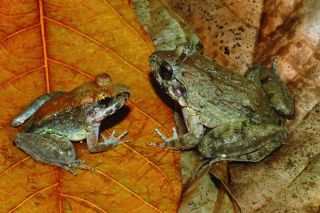 Freaky find: Herpetologist Jim McGuire was in for a surprise when he picked up one of these Indonesian fanged frogs and found it had just given birth to a handful of live tadpoles.
(Image: © Jim McGuire photos.)

Frogs and other amphibians lay eggs, but mammals give birth to live young, right? Not always. A newly described species of frog gives birth to live tadpoles, and is the only known frog to do so, researchers say.

The discovery happened one night last summer, when researcher Jim McGuire was tromping through the rainforest in Sulawesi, an Indonesian island east of Borneo. McGuire stumbled across what looked like a single male frog. But when he reached out to grab it, he found himself holding much more, said McGuire, a herpetologist at the University of California, Berkeley.

"As soon as I picked her up, she squirted tadpoles all over my hand," McGuire told Live Science. He didn't have time to take a video of the frog giving birth, but did find more tadpoles in nearby pools. The find "was clear indication" that the females do in fact give birth to live tadpoles, he said.

The frogs were members of a group of Asian fanged frogs that were discovered several decades ago by McGuire's colleague Djoko Iskandar, a zoologist at Indonesia's Institut Teknologi Bandung, but the species had not yet been reported in a scientific paper, McGuire said.

Iskandar had suspected such frogs might gave birth to live younginstead of laying eggs, but scientists had never observed the animal mating or birthing tadpoles until McGuire's find. [40 Freaky Frog Photos]

McGuire and his colleaguesnamed the species he found Limnonectes larvaepartus, and describe it in a study published today (Dec. 31) in the journal PLOS ONE.

Frogs reproduce in a variety of ways, the researchers said. In most species, fertilization happens outside of the female's body: the female lays eggs and the male then lays sperm on top of them. But in about a dozen species, the males fertilize the eggs inside the female's body.

For most of these frogs, the process isn't well-understood. But for two species of "tailed" frogs, the males have evolved a penis-like organ called the tail, which transfers sperm to the female. The female tailed frogs then lay their fertilized eggs underneath rocks in streams. Some other frogs that have internal fertilization give birth to miniature frogs, or "froglets."

But L. larvaepartus is the only species known to give birth to live tadpoles, the researchers said. The species seems to prefer giving birth in small pools, away from streams, perhaps to avoid bigger fanged frogs that live there. Males of the species may guard the tadpolesafter they're born, some evidence suggests.

The frog is only the fourth described species of fanged frog on Sulawesi, but the researchers said in their report that they suspect there may be as many as 25 species. Fanged frogs are named for the fanglike structures on their lower jaw, which are used in fighting. The creatures can weigh as much as 2 lbs. (900 grams), but some are no more than the weight of a few paperclips. L. larvaepartus weighs about 0.18 to 0.21 ounces (5 to 6 grams).

The island where the frogs are found, Sulawesi, formed when several islands merged together about 8 to 10 million years ago. Today, it is a hot spot for evolutionary diversity.

Many species of fanged frogs may live in a single area, but each may have adapted to their own ecological niches, the researchers said. They are now trying to understand how much of the diversification occurred before the islands merged, and how much happened afterward.