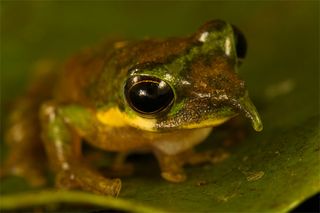 This newly discovered tree frog (Litoria sp. nov.) has a long, Pinocchio-like spike on its nose that points upward when the male is calling but deflates and points downward when he is less active. The frog was discovered by Paul Oliver of Australia.
(Image: © Tim Laman/National Geographic.)

Pinocchio-nosed frogs, gargoyle-faced geckos and the world's smallest wallaby are among the newly identified species discovered during an expedition to Indonesia’s remote Foja Mountains and announced today.

Scientists endured torrential rainstorms and life-threatening unpredictable flash floods as they tracked species from the low foothills at Kwerba village to the top of the mountains at 7,200 feet (2,200 meters) in Indonesian New Guinea in 2008.

"It is not an exaggeration to say that the Foja Mountains are well-defended against any access," said expedition participant Bruce Beehler, a senior research scientist at Conservation International, in a past dispatch from the field.

The newfound species they detailed include several new mammals, a reptile, an amphibian, at least 12 insects and a new bird.

The amphibian in question was a tree frog with a long, Pinocchio-like spike on its nose that points upward when the male is calling but deflates and points downward when he is less active. This frog's discovery was a happy accident, after herpetologist Paul Oliver spotted it sitting on a bag of rice at the campsite.

In addition to the new dwarf wallaby [see image] — the smallest member of the kangaroo family documented in the world — scientists obtained the first photographs of the extremely rare golden-mantled tree-kangaroo, which is critically threatened by hunting in other parts of New Guinea.

The other new mammals the researchers saw include an oversized but surprisingly tame woolly rat, a new blossom bat that feeds on rainforest nectar and a small tree mouse.

One surprise for the scientists came when ornithologist Neville Kemp spotted a pair of imperial pigeons with feathers that appear rusty, whitish and gray. This novel species was overlooked on previous surveys yet seen no fewer than four times by scientists. Its rarity could indicate low population numbers.

Other species the researchers documented in their treasure trove of discoveries include a gargoyle-like, bent-toed gecko with yellow eyes, a new black-and-white butterfly related to the common monarch, and a new flowering shrub.

The researchers had ascended into an area where no villagers visited. "As a result wildlife was abundant and unwary," Beehler recalled in a dispatch. "The dawn chorus of birdsong and the rattle of cicadas and katydids were deafening. There is nothing like it!"

"A giant northern cassowary (Casuarius unappendiculatus) stood on the beach at one point and watched us as we hiked up the opposite side of the river. This 100-pound bird sported a massive body covered by shaggy black fur-like feathers, a bare neck and head of pale blue, orange, navy, and yellow, and a high casque (bony crest) atop its head that looks a bit like a crown," Beehler noted. "Birds were everywhere — five varieties of cawing birds of paradise, vulturine parrots (Psittrichas fulgidus), sulphur-crested cockatoos (Cacatua galerita), palm cockatoos (Probosciger aterrimus), various colorful lorikeets, noisy Blyth's hornbills (Rhyticeros plicatus)."

The pristine wilderness they explored encompasses an area of more than 300,000 hectares (1,158 square miles) of undeveloped and undisturbed rainforest with no roads. It apparently represents a profound source of stunning diversity because of its relative isolation, elevation and tropical environment. It is also invaluable to local forest-dwelling peoples who depend on its resources.

Conservation International and the National Geographic Society announced their findings May 17, during a week that will mark the 2010 International Day for Biological Diversity. The researchers hope the documentation of such unique, endemic biodiversity will encourage the government of Indonesia to bolster long-term protection of the area, which is today classified as a national wildlife sanctuary.

"While animals and plants are being wiped out across the globe at a pace never seen in millions of years, the discovery of these absolutely incredible forms of life is much needed positive news," Beehler said. "Places like these represent a healthy future for all of us and show that it is not too late to stop the current species extinction crisis."