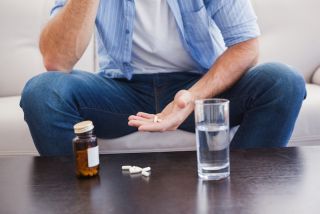 The percentage of Americans taking medication to control their cholesterol has risen by a third over the past decade, a new study finds.

In 2012, the percentage of people ages 40 and over who said they had used a cholesterol-lowering medication in the past month was 28 percent, up from 20 percent in 2003, according to the report from the Centers for Disease Control and Prevention.

Most of the increase was in the use of cholesterol-lowering drugs known as statins, the researchers found.

The number of adults ages 40 and older taking statins increased from 18 percent to 26 percent over the study period, according to the report. The most commonly used cholesterol-lowering medication was simvastatin (sold under the brand name Zocor), followed by atorvastatin (Lipitor) and pravastatin (Pravachol).

Cardiovascular disease is the leading cause of death in the United States; nearly one in three Americans will die of heart disease or stroke, according to the American Heart Association. [Beyond Vegetables and Exercise: 5 Surprising Ways to Be Heart Healthy]

High cholesterol is a major risk factor for cardiovascular disease, and the use of statins has been "strongly associated" with a lowered risk of atherosclerosis, or hardening of the arteries. National cholesterol treatment guidelines emphasized the use of cholesterol-lowering medications for the prevention of coronary heart disease.

Use of these medications also increased with age. About 17 percent of people ages 40 to 59 said they took cholesterol-lowering drugs, compared with 48 percent of people age 75 and older. In addition, people ages 40 to 64 who had health insurance were more likely to use a cholesterol-lowering medication than those without insurance. There was no difference in use of the drugs between men and women, or among different races, the survey found.

"During that time, I think there was a concerted effort by medical agencies to educate patients" about knowing their cholesterol levels, Underberg said.

Around the same time, generic versions of statin medications first went on the market, Underberg said. He said that a combination of the new guidelines, increased awareness of heart disease and greater availability of the drugs all contributed to the surge in their use over the study period. The increase could also be a response to the rise of obesity, he added.

The use of statins has been linked to a decreased risk of cardiovascular disease. But like any drugs, statins can have side effects. The most common are muscle achiness, weakness or soreness, Underberg said. Statins also carry a warning of "mild, reversible cognitive defects" such as memory loss, although recent data don't support this, Underberg said.

In all cases, taking medication to lower cholesterol is "not an excuse to go do whatever you want," Underberg warned. Diet and exercise are still some of the most important factors in preventing heart disease, he said.

The findings were detailed today (Dec. 23) in the CDC's National Health and Nutrition Examination Survey.