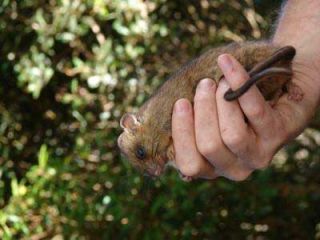 The greater dwarf cloud rat captured this month in the Philippines.
(Image: © Larry Heaney, courtesy of The Field Museum)

The greater dwarf cloud rat was thought to live in the canopies of tall trees in the Philippines, but the last sighting of one was 112 years ago. Now it has been found again.

One of the rodents was found in Mt. Pulag National Park in the Philippines.

"This beautiful little animal was seen by biologists only once previously — by a British researcher in 1896 who was given several specimens by local people, so he knew almost nothing about the ecology of the species," said Lawrence Heaney, curator of mammals at the Field Museum and leader of a team that rediscovered the rat. "Since then, the species has been a mystery, in part because there is virtually no forest left on Mt. Data, where it was first found."

The dwarf cloud rat (Carpomys melanurus) is a smaller relative of giant clouds rats, spectacular animals found only on Luzon Island in the Philippines, but widespread and comparatively well known.

The dwarf cloud rat was captured by Danilo Balete of the Philippine National Museum, in a patch of mature mossy forest (also called cloud forest) high on Mt. Pulag, at about 7,700 feet (2,350 meters) above sea level. It was in the canopy of a large tree, on a large horizontal branch covered by a thick layer of moss, orchids and ferns, Balete said.

"We had suspected from its broad, hand-like hind feet that it lived up in big trees, but this is the first evidence to confirm that," Balete said.

Since this is the first time the dwarf cloud rat has been seen in its natural habitat, the data collected from this specimen "will significantly augment our understanding of how these rodents evolved, what makes them tick, and how we can keep them around," said William Stanley, collections manager of mammals at the Field Museum. "Also, finding this animal again gives us hope for the conservation of one of the most diverse and threatened mammal faunas of the world."

The research team thinks that this species probably lives only high in the big canopy trees in mature mossy forests at high elevations.

"Now that we know where to look for them, it will be possible to learn more," Heaney said.