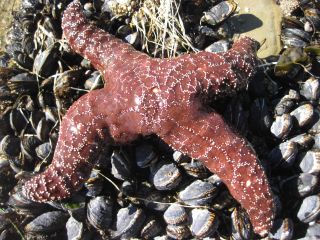 It starts with the curling of a limb — just a subtle hint that the sea star's body isn't behaving the way it should. Then all the limbs join in, twisting themselves into a pretzel shape until they fall off altogether. By the time the disease has run its course, there's nothing left of the infected animal but a gooey lump of decomposing flesh.

While this may seem like the premise of a zombie movie, it's actually a description of starfish wasting syndrome — a real disease that is killing off one of the sea's most iconic invertebrates. While the disease has affected starfish (also known as sea stars) for decades, scientists have long puzzled over what might be causing it. Now, one group of researchers may finally have the answer.

The disease is most likely caused by a virus, according to the researchers, who represent a number of institutions, including Cornell University and the University of California, Santa Cruz. Specifically, the scientists have linked the disease to a densovirus (Parvoviridae), which currently affects at least 20 species of starfish on the Pacific coast of North America. [In Photos: Sick Sea Stars Turn to Goo]

Starfish wasting disease was first identified in 1979, but since then, no one has been able to pin down a precise cause, according to Pete Raimondi, a professor of ecology and evolutionary biology at UC Santa Cruz and co-author of the new sea star study. Scientists long believed that outbreaks of the disease — which occurred in 1983, 1998 and most recently starting in 2013 — may be linked to environmental stressors, such as spikes in ocean temperature or pollution from shipping lanes and marinas, Raimondi told Live Science.

But while such stressors may have something to do with the rapid spread of sea star wasting syndrome, the researchers now think the underlying cause of the disease is the waterborne densovirus.

"What convinced me that this was an infectious agent was that sea stars that had been in captivity in public aquariums for 30 years suddenly died," said Ian Hewson, an associate professor of microbiology at Cornell and lead author of the study. "There was good evidence that it was something coming in through the intake for the aquariums that wasn't being removed by the sand filtration. And [aquariums] receiving UV-treated water weren't getting sick."

To test this hypothesis, Hewson and his team used a process known as metagenomics, in which genetic material is collected directly from environmental samples and then sequenced in a lab. The researchers collected tissue samples from both healthy starfish and those affected by the wasting disease. They then extracted DNA from these samples and tried to figure out how the healthy tissue differed from the infected tissue. The difference between the two kinds of samples soon became clear: the infected tissue contained a densovirus, Hewson said. [5 Mysterious Animal Die-Offs]

"Armed with that knowledge, we went out and tried to understand whether the association between the disease and the densovirus was robust," Hewson told Live Science. Aided by Raimondi and other scientists on the West Coast, the researchers collected 465 healthy and diseased sea stars, he added.

With sea stars in hand, the researchers determined which of the animals were infected with the virus. They then measured how much of the virus was present in the animal's tissue per unit of weight— a measurement known as viral load. Ultimately, they found a significant association between the presence of the disease and the abundance of the viral tissue, according to Hewson. The researchers believe this association supports their hypothesis that the wasting disease is caused by the sea-star associated densovirus.

In addition to these tests, the researchers infected some healthy sea stars with the densovirus, and the animals became sick within 7 to 10 days, Hewson said.

"What we're dealing with are animals that are crawling with bacteria and other microorganisms. Trying to prove beyond a reasonable doubt that any specific virus is responsible for the disease is a really big challenge because you can't isolate it away from those native bacteria. But our evidence is very strong that it’s a sea star associated densovirus," Hewson said,

Now that scientists have an idea about what may be causing the biggest sea star plague in history, they can start focusing on how the virus attacks the sea star's tissues and what might be triggering outbreaks.

"An avenue of research that we're really going to have to pursue is how much of a reservoir effect is there in the system," said Raimondi, who notes that it's possible other species are playing host to the virus between outbreaks.

The researchers are also hoping to keep studying the ecological effects of the disease, according to Hewson.

"Sea stars are known as keystone predators. That means they have a disproportionately large impact on the ecosystem. They’re not that abundant, but if you remove them, it can have this cascading effect," Hewson said.

Sea stars eat sea urchins and bivalves, such as mussels and clams. But in areas where sea star populations are dwindling, these prey animals have started to take over, altering the natural landscape, Raimondi said.

For example, the urchin population in some areas has exploded. Sea urchins feed on kelp sporophytes, or seedlings, which later attach to rocks to become kelp forests. Those forests, in turn, are home to juvenile fish as well as a number of organisms that cling to this aquatic plant, Hewson said. Kelp forests are also threatened by an increase in the number of bivalves, which compete with kelp for space atop rocky surfaces.

However, there is a glimmer of hope amid the demise of the starfish population, which in some areas has decreased by as much as 99 percent, according to Raimondi.

"Massive numbers of [sea star] babies are showing up, and that's typically a very good sign," Raimondi said. "They usually die because they're small, but if they not only survive but also show up in other places, than recovery could be quick."

For now, Raimondi is still busy monitoring the health of sea star populations up and down the Pacific coast of North America. He and his colleagues at UC Santa Cruz help keep track of these and other species through Pacific Rocky Intertidal Monitoring, a collaborative research project that collects data on marine populations.

Raimondi and his team also ask residents of coastal regions to report any evidence of sea star wasting disease in their area. Citizen scientists can see the group's website for more information about how to identify and report the disease.

The new study was published today (Nov. 17) in the journal Proceedings of the National Academy of Sciences.