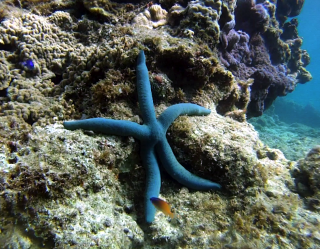 Linckia laevigata, a species of starfish commonly found in the tropical waters of the Indian Ocean and the western and central Pacific Ocean, have relatively poor vision and cannot differentiate between different types of light.
(Image: © Anders Lydik Garm )

Starfish may have the incredible ability to regenerate their limbs, but when it comes to the power of sight, these marine creatures fall a bit short, a new study finds.

Researchers at the University of Copenhagen in Denmark studied the eyes of Linckia laevigata, a species of starfish commonly found in the tropical waters of the Indian Ocean and the western and central Pacific Ocean; they discovered these sea stars are color-blind and have relatively poor eyesight.

"We studied their spectral sensitivity, meaning what colors of light they see, and found that they don't have color vision," said study lead author Anders Garm, an associate professor in the department of biology at the University of Copenhagen. "Since they can't distinguish between different types of light, they basically see everything in grayscale." [Vision Quiz: What Can Animals See?]

The researchers also found that starfish do not see sharp, clear images. In fact, their eyes have resolutions of only about 200 pixels, Garm told LiveScience. In comparison, most digital cameras have resolutions measured in millions of pixels, or mega-pixels. Human eyes, on the other hand, have roughly 1 million nerves, and a combined total of 120 million rod and cone cells, to see the world in vibrant detail.

Starfish also process images at a much slower rate than humans, which means they are unable to see fast-moving objects, Garm added. For visual systems, this can be measured in hertz, which is a unit of frequency signifying the number of cycles per second of a periodic phenomenon.

"When it comes to the speed of vision, humans typically see things changing at a rate of about 30 to 40 hertz," he said. "With these starfish, we're talking about one to two hertz. This all goes to show that these animals sample a lot less information at any given time than we do."

Yet despite having poor eyesight, starfish eyes are well-suited for their specific needs in the marine environment.

"In terms of evolution, animals only evolve senses as advanced as they need," Garm said. "The vision of the starfish is enough to get it through the things it has to do; they have the exact eyes they need, so to speak."

Starfish lack a centralized brain, and are thought to have a dispersed nervous system in which each arm essentially has its own brain. This so-called "decentralized nervous system" could explain why starfish eyes have low spatial and temporal resolution.

"It's not surprising that starfish don't see sharp, detailed images, because that would require much more brain power than they have," Garm said. "From an information processing point of view, it would be a waste of energy if they had much better vision."

Still, the researchers were able to demonstrate that starfish use their visual systems to recognize and navigate toward their habitats, Garm said.

"The eyes will optimize the contrast between the coral reef they live on and the open ocean," he explained. "This means if they are crawling around on the reef and suddenly get displaced, they can see the reef and move back toward it so they don't starve."

Garm and his colleagues tested this hypothesis with navigation experiments with regular starfish and ones that had been blinded.

"When we displaced the starfish from the reef onto a sand flat, the ones who had intact eyes moved straight back, whereas the blinded ones walked at the same pace but in random directions," Garm said.

The researchers are now expanding their research to include 20 different species of starfish, and they suggest these different types of sea stars may have similar visual systems. The scientists also intend to examine features of the starfish's visual system — such as individual photoreceptors — in more detail.

The new findings were published online today (Jan. 7) in the journal Proceedings of the Royal Society B: Biological Sciences.