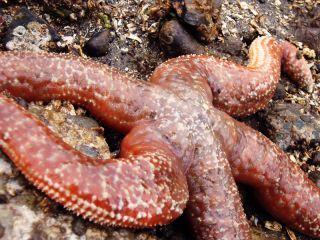 Some sea star species, such as this false ochre sea star, are top predators and play a crucial role in their ecosystems.
(Image: © Katrina Outland | Shutterstock)

A mysterious disease that has turned hundreds of starfish into limp lumps of goo along both the East and West coasts in recent months could potentially induce a cascade of other ecological effects in tidal systems, researchers say.

The disease — known as sea star wasting syndrome — begins as a small lesion, and eventually results in the loss of limbs and ultimate disintegration and death of the leggy animal. The cause of the disease remains unknown to researchers, who have not been able to determine if it is related to a bacterial infection, a virus or a combination of effects worsened by environmental stressors, such as increased water temperature.

The syndrome has afflicted sea star populations on the West Coast in the past, and in those instances, populations eventually bounced back, Smithsonian invertebrate zoologist Christopher Mah told LiveScience. But this current episode appears more severe than previous cases, killing up to 95 percent of some populations consisting of hundreds of individuals, The Associated Press reported earlier this week. [The 5 Most Mysterious Animal Die-Offs]

"We've never seen it at this scale up and down the coast," Pete Raimondi, a professor of ecology at the University of California Santa Cruz involved in tracking the disease, said in a statement on Tuesday (Nov. 5).

Since June, researchers have seen the disease spread from as far as British Columbia, Canada, down through California and, within the past year, from Maine through New Jersey. The scientists tracking the disease find this simultaneous bicoastal infection especially alarming.

"There is no direct route to get from Providence to Seattle," Gary Wessel, a molecular biologist at Brown University who is working to identify the agent causing the disease, told LiveScience. "So we don't know how the pathogen would be doing this."

Researchers do not think the disease has spread to other marine animals, but other animals will still feel the impact of the starfish decimation, Mah said. Starfish are one of the most common animals in coastal tide pools and other shallow nearshore ecosystems, and some species, such as the West Coast's ochre sea star (Pisaster ochraceus) and sunflower sea star (Pycnopodia helianthoides) — the largest sea star on Earth — are considered keystone species. This means that, without them, the structure of their ecosystems crumbles, as would an arch without the support of its top-center keystone.

The ripple effects of the decline would likely vary from region to region, but could potentially be drastic, Mah said. In the past, a decline in ochre sea star populations along the West Coast led to the massive proliferation of mussels at the expense of other animals, because the sea star had been the mussel's top predator. Sea stars also feed on the larvae of many invertebrates — or animals without a backbone, including various mollusks and sea slugs — which helps keep adult populations in check. Without sea star predation, more larvae will grow to adulthood and certain populations could balloon, though to what extent remains unclear, Mah said.

"A change in community structure can always have unpredictable effects," Mah said.

In addition to ecological changes, the loss of sea stars could induce changes in abiotic (nonliving) environmental conditions, such as aeration of seafloor sediment and nutrient supply in the water column. That's because critters eaten by sea stars help regulate these conditions. Worms, for example, aerate sediment and clams suck up nutrients that might otherwise fertilize large mats of smothering algae. An off-kilter ecosystem could alter the distribution of these environmental contributions. [Marine Marvels: Spectacular Photos of Sea Creatures]

Still, Mah emphasized that scientists are only beginning to understand what, exactly, the disease is and how many sea stars have already been affected by it, so any projections regarding its ripple effects remain speculative at this point.

"I think it's important not to jump off the handle and make rash assumptions about catastrophic environmental effects," Mah said. "We don't have any data that that is the case yet."

And, paradoxically, Mah pointed out that since marine ecologists still have a lot to learn about sea star ecology in general, the animal's absence could offer a valuable opportunity to tease out its effect on the ecosystem.

"This could be a blip in the ecology of this animal, or maybe it is something else," Mah said. "But we definitely need to find out, because the sea stars are important indicator species, and if they begin to die off, then that could be a sign that something else bad is happening in the environment."

Researchers at UC Santa Cruz's Long Marine Lab and others involved in tracking the disease have encouraged the public to document any cases of goopy sea stars they come across by uploading images into the citizen-scientist website iNaturalist. This will help the researchers determine the geographic extent of the disease, and potentially track the direction it is spreading in real time.

Editor's note: This article was updated to clarify that past episodes of sea star wasting disease occurred on the West Coast, not on both U.S. coasts.