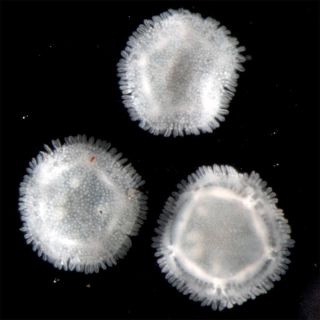 These Xyloplax specimens, spanning less than a quarter-inch (2-5 millimeters) in diameter, were collected in 2010 from the Pacific Ocean at a depth of 7,267 feet (2,202 meters).
(Image: © Ben Grupe/Scripps Institution of Oceanography, University of California, San Diego.)

One starfish species doesn't seem to want to grow up. Scientists have discovered a disc-shaped animal in the deep Pacific Ocean whose body plan is stuck in the juvenile phase of the life cycle.

The animal, a species of the genus Xyloplax, lives along the deep-sea floor, where being small can be beneficial. It spans just millimeters in diameter and lacks the telltale arms typically seen in adult starfish. [Image of Xyloplax starfish]

"I would say that just being a little disc-like creature allows you to get in the nooks and crannies of pieces of wood where there's all this microbial soup and [they can] live like bedbugs and slurp up the stuff around them," researcher Daniel Janies, a computational biologist at The Ohio State University (OSU), told LiveScience.

Scientists knew Xyloplax was an echinoderm, a group of organisms that includes starfish, sea lilies, sea cucumbers, brittle stars and sea urchins. Like other echinoderms, Xyloplax sports suckers around the circumference of its body, which Janies says are "the business end of all echninoderms," as the suckers are used for things like respiration, locomotion and holdling onto structures. But due to its odd body shape, scientists weren't sure which class it fit into, speculating perhaps it represented a distinct ancient lineage.

Results suggested "Xyloplax is simply a starfish that is closely related to the asteroid family Pterasteridae," the team writes online April 27 in the journal Systematic Biology.

Like Xyloplax, many pterasterids live in deep or polar seas and brood young in specialized adult chambers until the young reach an advanced juvenile stage, after which they are released as free-living individuals.

The odd body plan of Xyloplax, the team says, likely evolved via a pattern called progenesis in which an organism's life cycle is truncated, leaving the adult with features retained from its juvenile stages. For example, the arms of a starfish typically grow axially, like spokes of a wheel, as they develop from juveniles to adults; Xyloplax grows along its circumference, like the wheel itself, and never develops arms.

"Xyloplax is just a little starfish that has a strange body plan and habitat, so strange that many could not recognize it as a starfish until we unlocked its genome and development," Janies said.

Janies' co-authors include Janet Voight, in the department of zoology at the Field Museum of Natural History in Chicago, and Marymegan Daly, in the department of evolution, ecology and organismal biology at Ohio State. The research is part of a larger study funded by the National Science Foundation called Tree of Life project, whose goal is a better understanding of the interrelationships of all forms of life.