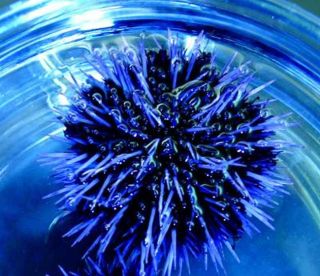 Meet your new evolutionary cousin, the sea urchin. By analyzing the newly sequenced genome of the spineless creature, an international team of scientists found just how much we have in common with them.

The research could lead to new drugs for human ills.

“The sea urchin is surprisingly similar to humans," said co-director of the sea urchin sequencing project George Weinstock, of Baylor College of Medicine.  "Sea urchins don't look any more like humans than fruit flies, but about 70 percent of sea urchin genes have a human counterpart whereas only about 40 percent of fruit fly genes do."

In a special report detailed in the Nov. 9 issue of the journal Science, research teams describe the genome of the purple sea urchin, revealing not only human-urchin similarities but also features such as the urchin’s immune system, which far surpasses that of humans.

A sea urchin’s pincushion look comes from a round inner shell, which is covered with spikes for spearing food and tiny tube feet used for creeping along the seafloor. They belong to the phylum Echinodermata, which includes starfish and sea cucumbers, whereas humans belong to the phylum Chordata, or all animals with a notochord during some point in their development. (The notochord is a rod-like struture that gives the body support during locomotion.) Both the echinoderms and chordates belong to a larger group called the deuterostomes.

This relationship means sea urchins can serve as a model for understanding how the group of animals that includes humans split off and evolved different traits. For the genome project, scientists collected DNA from the sperm of a male California purple sea urchin, a species found along the west coast of the United States from Baja to Alaska.

After identifying 23,300 genes made from 814 million letters of DNA code taken from the California purple urchin (Strongylocentrotus purpuratus), the team of scientists found that 7,077 of them were also found in humans.

Analysis of the sea urchin genome—the first-ever chordate to be sequenced— revealed a surprisingly unique and complex immune system, which could explain their lengthy life spans of up to 100 years.

“They live as long as we do, maybe longer, and thus must protect themselves," Weinstock told LiveScience. "So an elaborate set of defense genes would be necessary. What was absolutely unexpected was the finding that they had expanded the innate immunity branch of the immune system."

Whereas humans have an acquired immune system, in which our body must learn how to attach and destroy invaders once they enter the body, sea urchins are hard wired to detect foreign bacteria and viruses and begin an attack.

This rich toolbox of sea urchin genes could lead to new drugs for combating infectious diseases. In fact, sea urchins carry genes associated with many human diseases, including muscular dystrophy and Huntington's disease

"Nobody would've predicted that sea urchins have such a robust gene set for visual perception," said Gary Wessel, a member of the Sea Urchin Genome Sequencing Consortium, of Brown University.

Some of the visual sensory proteins are clustered on an appendage known as the tube foot and is thought to aid processing of sensory of information.  “It is remarkable that the same sensory proteins are used in organs with such different structures in sea urchins and man," Weinstock said.

It's not clear, however, how the spindly creatures use the vision proteins.

“There is not a lot of light at the bottom of the ocean so it is not clear what they might be ‘seeing,'" Weinstock said. "This is certainly an area that will be studied intensively as a result of the genome project.”

Editor's Note: This article was updated to indicate that animals in the phylum Chordata have a notochord, not a backbone as had been stated previously.