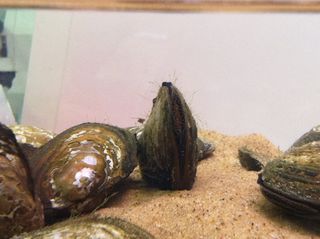 Bivalves, like these California floater mussels, could be used to filter pollutants from waterways.
(Image: © Niveen Ismail, Stanford University)

They might not have feather dusters, brooms or even arms and legs, but bivalves — such as clams, mussels and oysters — make good underwater maids, a new study suggests.

These useful creatures serve as tiny water filtration systems, constantly sieving the water around them in their hunt for a meal of bacteria or microscopic algae known as phytoplankton. As they filter water, the bivalves' tissues absorb some of the chemicals and pathogens that are present — things like herbicides, pharmaceuticals and flame retardants — according to researchers at Stanford University in California.

To see just how good the bivalves are at cleaning up toxins in their environment, the researchers put California floater mussels and Asian clams into a tank with treated wastewater that contained various levels of contamination. Within 72 hours, the bivalves had removed up to 80 percent of some of the contaminants from the water, according to the researchers. [In Photos: World's Most Polluted Places]

Observing these shellfish soaking up harmful chemicals got the Stanford researchers thinking about how they might put the cleansing clamsand mussels to good use. They decided to assign some of these underwater maids a new job: cleaning up a dirty lake in the middle of San Francisco.

Mountain Lake is a body of water that researchers say is heavily polluted with harmful bacteria and other contaminants. The researchers are still deciding how many clams and mussels they'll need to introduce into Mountain Lake to get the job done, and they’re also trying to decide how to best deploy the bivalves.

"We are considering using a raft carrying caged native bivalves, which will allow us to monitor the health of the bivalves and also protect them from predators," study lead author Niveen Ismail, a Stanford graduate student in environmental engineering, said in a statement.

This method of deploying oysters and other shellfish, which involves placing the bivalves in a tray or cage and suspending them in water from an anchored raft, has been used before in places such as the Bronx River and Long Island Sound, according to Ismail and his colleagues. In those locations, Eastern oysters are used to control nutrients and excessive algae, but the researchers hope that in Mountain Lake, the bivalves will also help cleanse the water of pollutants.

"Each native mussel filters about two liters of water a day, so it doesn't take a whole lot to improve water quality," study co-author Richard Luthy, the Silas H. Palmer Professor of Civil and Environmental Engineering and a senior fellow at the Stanford Woods Institute for the Environment, said in a statement.

Detailed findings of the study were published online July 13 in the journal Environmental Science and Technology.