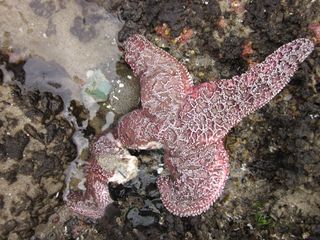 The leg of this purple ochre sea star in Oregon is disintegrating, as it dies from sea star wasting syndrome.
(Image: © Elizabeth Cerny-Chipman, courtesy of Oregon State University)

A mysterious disease that is turning sea stars to goo has taken off along the Oregon coast, with up to half or more of the creatures being infected in just the last few weeks, scientists say.

Until now, Oregon was the one state along the U.S. West Coast essentially spared from the disease. In April, researchers estimated less than 1 percent or so of the purple ochre sea stars (Pisaster ochraceus) living within 10 sites along Oregon's intertidal zones — which provide an easily accessible place to monitor sea stars — were affected by the wasting disease. By mid-May that percentage had gone up slightly, and then after that it seemed to skyrocket.

"The percentages we saw last week, they were as high as 40 to 60 percent of the population that's showing signs of wasting," said Bruce Menge, a marine biologist at Oregon State University, who is studying the wasting disease in Oregon. [See Images of the Purple Ochre Sea Stars]

The disease tends to progress from no outward signs to behavior changes in which the sea stars cross their arms and seem to collapse on themselves. Then white lesions appear on the surface of the sea star's body that turn into holes; those lesions are typically followed by the disintegration of skin around the lesion and the loss of a limb or several limbs, and in extreme cases the animal's entire body is affected by the syndrome. Some of the creatures physically tear their bodies apart in the process, scientists say.

"We've seen a number of cases where all that's left is a puddle of their skeletal parts and a bunch of bacteria eating away at the tissue," Menge told Live Science. "It's a pretty gruesome thing to see."

The current outbreak of sea star wasting syndrome was first reported in June 2013 along the coast of Washington by researchers from Olympic National Park. Since that report, die-offs have been documented everywhere from California to Alaska and even along the East Coast from Maine through New Jersey.

"Wasting has been known for a long time, but usually it's very localized to a single site or single region," Menge said. When that's the case, as it was last August just north of Vancouver, British Columbia, the chances for recovery are high since the plankton, or floating forms, of the sea stars from healthy, nearby populations can recolonize those areas that were hit.

"The thing that is worrisome now is that it's happening pretty much all along the West Coast, even up into Alaska," Menge said.

In this widespread outbreak, Oregon seemed to be a lucky outlier. "We were hoping that for some weird reason we were going to miss out on it. We were optimistic," Menge said. "It finally did hit, and we really have no idea what the pathogen is, what the mode of transmission is. "

The cause of the wasting disease is unknown, though scientists working on the mystery are testing whether an underlying virus or bacteria is to blame, along with some environmental stress, such as water temperature or salt content, making the organisms more vulnerable to it.

"We are finding correlations between certain microorganisms and viruses present in the lesions," Gary Wessel, of Brown University in Rhode Island, told Live Science in an email. "We are now testing whether these organisms are causative (by infecting healthy animals and seeing if they replicate the wasting phenotype) or just associated."

Wessel added that his lab is also looking into the impacts of environmental stressors.

"In our challenge experiments to test infectivity, we are stressing the animals with salt conditions and temperature to determine if this environmental stress makes them more susceptible," Wessel said.

Since sea stars can act as keystone predators, meaning their predatory activities shape an ecosystem, their loss could have far-reaching impacts, the researchers say. By eating mussels on the low shores in Oregon, sea stars keep those populations in check so the bivalves don't explode in numbers, at the expense of other organisms. Menge said it's too early to say whether the sea stars' mussel-munching could be compensated by whelks in the area.

In addition to leaving a void in a finely tuned ecosystem, the loss of sea stars would also disrupt a seeming iconic shoreline organism.

"The aesthetics of the rocky shore are going to be quite a bit less," Menge said. "They are charismatic beasts."