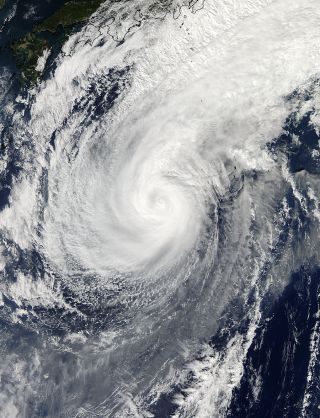 On Nov. 5, NASA's aqua satellite captured this image of Typhoon Nuri, the storm that combined with an extra-tropical system to form the low pressure system known as the "Bering Sea bomb." That weather system is, in part, responsible for the cold weather now chilling the U.S.
(Image: © NASA Goddard MODIS Rapid Response Team)

More than a month before the official start of winter, residents of parts of the United States are being blanketed with snow and hit with frigid temperatures. But the infamous polar vortex that sent Americans shivering last January isn't the only weather system responsible for this unseasonably cold weather, experts say.

The early onset of winter has manifested itself in different ways across the country, dumping more than 2 feet (0.6 meters) of snow in parts of Michigan and sending temperatures plummeting in places like Colorado. Even states in the South haven't been spared. In San Antonio, Texas, residents are enduring temperatures that are a full 20 degrees colder than average for this time of year.

It's easy to pin the blame for this wintry blast on the so-called polar vortex, a swirling mass of frigid air typically found over the Arctic that occasionally ventures southward. But the vortex is just one of the culprits for this week's cold snap, said Tom Kines, a senior meteorologist with AccuWeather. [Fishy Rain to Fire Whirlwind: The World's Weirdest Weather]

"It helped deliver the cold air, but the so-called polar vortex isn't going to be sitting over the U.S. for days and days," Kines told Live Science. In fact, the vortex is retreating northward into Canada right now, he said.

The reason the cold weather isn't heading back north with the polar vortex is simple: There's something in its way. That something is a jet stream, a river of wind that typically sits about 20,000 feet (6,100 m) or more above the Earth's surface and influences how air masses and weather systems are distributed.

"It's kind of like opening the floodgates: When the jet stream plunged south, so did that cold air," Kines said.

This particular polar vortex was strengthened by recent weather events in Alaska — in particular, the so-called "Bering Sea bomb," a record-breaking low pressure system that formed over the Pacific Ocean when Typhoon Nuri merged with an extra-tropical system from Siberia, said Roberto Mera, a Kendall Science Fellow with the Union of Concerned Scientists, a nonprofit science advocacy organization.

The Bering Sea bomb caused a strong bend in the jet stream pattern, forming a sort of slide through which cold air from the Arctic could whoosh down into states east of the Rocky Mountains (such as Minnesota, Wisconsin and Michigan), Mera wrote in a blog post for the Union of Concerned Scientists.

And there's more chilling news for states that have yet to feel the polar vortex's icy breath.

"There will be another surge of Arctic air associated with the polar vortex heading south next week, which will reinforce the cold across the northern half of the U.S.," Kines said. The north-central states — the ones who already got clobbered — will probably feel the brunt of this new surge on Monday (Nov. 17). But then, the cold will push eastward, leaving its frosty fingerprints all over the eastern part of the country by Tuesday (Nov. 18) or Wednesday (Nov. 19), Kines said.

Still, the relative warmth of the Atlantic Ocean waters will make it unlikely that coastal areas of the Northeast will experience heavy snowfall, Kines said. This means people in places like New York and Boston shouldn't have to get out their shovels just yet, Kines noted, but interior parts of the Northeast, as well as the Appalachians, could see snow.

If you're looking to ride out the rest of the fall season somewhere warm, you might want to head for the Sunshine State. Florida, Kines said, is one of the only states in the country that isn't likely to experience chilly weather over the next week.

Editor's Note: This story was updated to reflect the proper affiliation of Roberto Mera, one of the experts cited in the article.