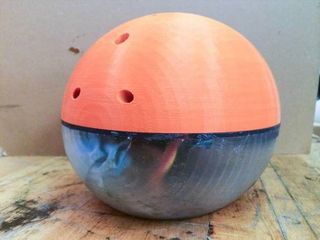 A warning to all smugglers: A new underwater robot could be used to sniff out contraband — including weapons and drugs — hidden aboard ships.

Developed by researchers at the Massachusetts Institute of Technology (MIT), the new, oval-shaped robot may be small (it's slightly smaller than a football), but it features some big crime-stopping abilities. One side of the bot is flat, which enables it to slide along the bottom of a ship to perform ultrasound scans of the vessel's hull.

This ultrasound capability not only lets the robot monitor what's inside a ship, but it also enables it to detect false hulls and propeller shafts, which are commonly used by smugglers to hide contraband, according to the researchers. And best of all, the bot's propulsion system is specially designed to minimize visible wake, making the bot a good fit for jobs that require stealth, such as underwater patrolling. [The 6 Strangest Robots Ever Created]

"It's very expensive for port security to use traditional robots for every small boat coming into the port," Sampriti Bhattacharyya, the robot's co-designer and a graduate student in mechanical engineering at MIT, said in a statement. But the MIT robot is relatively inexpensive because it uses 3D printing to make the main structural components for each robot, Bhattacharyya said.

“If this is cheap enough — if I can get this out for $600, say — why not just have 20 of them doing collaborative inspection? And if it breaks, it's not a big deal. It's very easy to make," Bhattacharyya said.

The part of the bot that houses the ultrasound panel, as well as other electronic components, is waterproof. This half of the bot contains a lithium-ion battery that can keep its charge for about 40 minutes, the researchers said. But by making the propulsion system more efficient, the researchers think they can increase the amount of time the robot can spend underwater(before it needs to be recharged) to 100 minutes.

The propulsion system is housed on the other, permeable side of the swimming bot. This half of the robot is made up of six pumps, each of which expels water through rubber tubes.

Some of these tubes are vented at the rounded side of the bot (the side opposite from the flat, ultrasound-emitting part of the bot). This keeps the device pressed up against the side of whatever ship it is trying to inspect. The other pumps vent out at either end of the robot, allowing it to move both forward and backward in the water. Initial tests of the underwater robot showed that it can propel itself in a straight line while scanning the hull of a ship, the researchers said.

The new bot is of particular interest to military officials, who would like to use it for a range of underwater operations, including detecting smuggled weapons or drugs, or finding stress fractures in the hulls of ships and other vessels, said Nathan Betcher, a special-tactics officer in the U.S. Air Force.

The robot could also be used to speed up the processing and routing of regular maritime traffic, Betcher said in a statement.