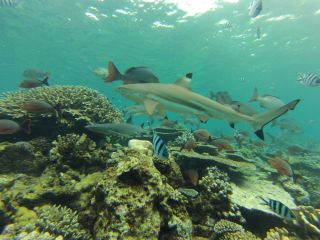 "Sharks need healthy reefs," Mario Espinoza, the study's lead researcher and a Ph.D. candidate in environmental science at James Cook University in Queensland, Australia, told Live Science in an email. "It's a simple but powerful message."

"It's a fabulous paper," said Demian Chapman, an assistant professor of marine biology at Stony Brook University on Long Island, who was not involved with the study. "It's one of, if not the largest, the most comprehensive studies of its kind."

The baited camera stations reached depths of between 23 and 377 feet (7 and 115 meters) — deeper than most divers studying sharks, Chapman said. The method also left the sharks alone, except for giving them a free snack of crushed oily sardines.

"It was completely unobtrusive to the sharks, because it was all done with cameras," Chapman said. "Other studies catch sharks."

Sharks appear in footage from 614 of the stations and in about a quarter of the videos, a percentage comparable to other studies, such as one Chapman did in Belize, he said. "They are top predators and they move around a lot," he said.

The recordings also showed what types of habitat the sharks preferred. For each video, the researchers noted the proportion of coral cover, plants and algae, filter feeders such as clams and sponges, soft coral and bare sand or mud, Espinoza said. They also assessed coral complexity, or the topographic contours and sizes of the reefs. [On the Brink: A Gallery of Wild Sharks]

"For example, some sites that had more coral cover and that were more complex usually had more sharks than those that were all sandy and muddy without any live cover," Espinoza said. "Sites with more corals also tend to have more fish, and more fish means more food [and] resources for sharks."

The researchers also saw more sharks in areas that were closed to fishing. However, many shark species still preferred areas with high coral cover within these protected areas, suggesting that both no-fishing zones and healthy coral reefs are vital for improving shark numbers, Espinoza said.

"This is particularly important because recent findings from a study published by scientists at AIMS [the Australian Institute of Marine Science] had shown a 50 percent decline in coral cover on the Great Barrier Reef since 1985," Espinoza said. "This large decline of coral cover is likely to have negative effects on a wide range of marine species, including shark populations."

The Great Barrier Reef no-fishing zones installed in 2004, as well as other marine management rules, such as enforcing catch limits and allocating fishing licenses, may help threatened shark species rebound, the researchers said.

A few years after the no-fish zones went into effect, the number of grey sharks increased, said Marc Nadon, a fishery assessment specialist at the University of Hawaii, who was not involved with the study. But the zones did not appear to help the tiger shark species (Galeocerdo cuvier), which swim long distances and often leave protected areas, he said.

Nadon noted that the underwater cameras recorded more sharks farther from the Australian coast. "To me, it seems like it's a factor of isolation," Nadon said. "The farther away you are from people, the more sharks you have."

Sharks are often demonized in popular culture, but studies like this remind the public that sharks are needed in the ocean, said Simon Pittman, director of Seascape Analytics, a marine consulting company, and a scientist with the U.S. National Oceanic and Atmospheric Administration's biogeography branch, who was not involved with the study.

"We need to remember as ecologists that sharks are top predators, and they're key to maintaining ecosystem integrity," Pittman said. "You can see them as canaries in a coal mine. They're sensitive to how we manipulate the system. If we're overfishing, not only are we taking sharks themselves, but we're taking the food of the sharks."

Future studies may determine exactly how sharks interact with coral reefs and other habitats they frequent, experts said.

"It could be that you need a healthy reef to have healthy shark populations," Chapman said. "Or some people say you need sharks to have a healthy reef. Whether it's the chicken or the egg, we don't know in this case."

The study was published today (Sept. 10) in the journal PLOS ONE.