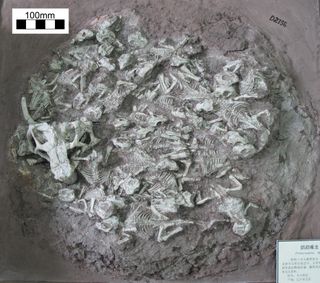 In a rock slab dating back some 120 million years, scientists have discovered the skeletons of 24 "baby dinosaurs" called psittacosaurs and that of an older individual, suggesting a caretaker was "babysitting" the nestlings.
(Image: © University of Pennsylvania)

A nest of baby dinosaurs with what might have been a juvenile babysitter sitting atop them has been discovered in China, researchers say.

These findings help shed light on how sociable these ancient reptiles might have been, scientists added.

The oldest known dino nesting sites are 190 million years old, and their existence suggests that even the earliest dinosaurs may have exhibited complex family behaviors.

The new findings center on a 2-foot-wide (60 centimeters) rock slab that contains skeletons of 24 very young dinosaurs and the skull of one older dinosaur. The finding suggests that a caretaker was overseeing a group of hatchlings, the researchers said. [Image Gallery: Dinosaur Daycare]

"In my opinion, this fossil is one of the most beautiful dinosaur fossils known," said lead study author Brandon Hedrick, a vertebrate paleontologist at the University of Pennsylvania in Philadelphia.

All of the dinosaurs were members of the species Psittacosaurus lujiatunensis. Psittacosaurs, plant-eating dinos that were about 3 to 6 feet (1 to 2 meters) long and walked on two legs. They were early relatives of horned dinosaurs such as Triceratops, though they lacked the horns and frills of these later dinosaurs.

"There were a large number of small predators that probably fed on Psittacosaurus, including many different types of theropod dinosaur, ranging from maniraptoran dinosaurs similar to Velociraptor to small tyrannosaurs," Hedrick said. "Psittacosaurus is also the only dinosaur known that has been found in the stomach of a fossil mammal. It seems like pretty much everything ate it."

Fossil hunters unearthed the 120-million-year-old bones in northeastern China's Liaoning province, the site of many discoveries of feathered dinosaurs over the last decade.

"It is definitely one of the most important sites in dinosaur paleontology on Earth and is certainly the most productive area found in the past 20 years," Hedrick said.

The 24 younger psittacosaurs are all similar in size — about 6 inches (15 cm) long. All of these appeared to have already hatched — no eggshells were found, and the ends of their bones were well developed, which suggests the animals were capable of moving around, Hedrick said.

The skull of the larger psittacosaur was firmly embedded in the same layer of rock as the 24 smaller reptiles. In fact, two of the younger animals were intertwined with the skull, which suggests that the animals were near one another when they died.

The larger skull was about 4.5 inches (11.6 cm) long, suggesting the dinosaur was between 4 and 5 years old, the researchers said. Previous findings suggested that P. lujiatunensis did not reproduce until age 8 or 9, so this creature was probably not the parent of the younger dinosaurs.

The researchers suggest the larger dinosaur may have been a babysitter, "such as an older sibling or even a non-related animal," Hedrick told Live Science. "Some birds such as the fairy wren display helper behavior, where they stay and help their parents raise their next clutch of eggs as opposed to starting a family of their own."

Even so, the "helper" behavior demonstrated by the "babysitter" is uncommon in birds, the only living members of the dinosaur family. Only 3 to 8 percent of bird species voluntarily tend another's young, Hedrick said.

Microscopic analysis of the rock that encased the fossils revealed that it was volcanic material, suggesting that the dinosaurs were caught in flowing material resulting from an eruption. Since there was no evidence of heat damage to the dinosaur bones, the researchers believe the flow was likely a lahar, which refers to a slurry of water, mud, rock and other debris associated with volcanic eruptions.

Hedrick cautioned that the researchers do not know for sure if the larger psittacosaur was a babysitter of the smaller psittacosaurs. It is also possible that "the juveniles and the larger individual were carried by a lahar by a river and deposited together, even though they may not have been directly interacting during life," he said.

The scientists plan to analyze the microscopic structure of the bones of the smaller animals to establish whether they were all at the same stage of development. If that were true, it would lend support to the idea that these animals interacted.

The scientists detailed their findings in the September issue of the journal Cretaceous Research.