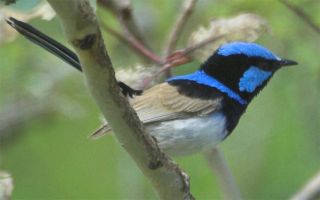 Child care can be costly, even in the avian world. Some clever and promiscuous mama birds save their energy and get a boost in health by relying on helper birds for "free" offspring-care, new research shows.

The study reveals how female superb fairy-wrens (Malurus cyaneus) skimp on allocating energy-costing nutrition to eggs developing inside them. Instead, they rely on helper birds later on to compensate by providing extra food to the offspring once they hatch from less nourished eggs.

The energy savings results in longer life spans for the mother wrens and therefore more opportunities for breeding. And that means the females will have more offspring during a lifetime.

Common in southeastern Australia, superb fairy-wrens either breed as pairs (one male and one female) or in groups in which one dominant male gets breeding access and one to four male helpers forego reproduction to care for offspring. The helpers are often sons from a previous breeding.

“Mothers effectively steal the child care from their current brood and spend this energy on producing more young in the future,” said study team member Rebecca Kilner of the University of Cambridge. The results are detailed in the Aug. 17 issue of the journal Science.

Scientists have known that fairy-wren parents get child-rearing assistance from helpers, but have been puzzled by the fact that offspring don't appear any healthier.

In a series of experiments, one of which involved swapping eggs between "helper" nests and "paired" nests, the researchers found the solution.

Females with nest helpers produced eggs that were 5 percent smaller with disproportionately smaller yolks and lower nutritional content, resulting in smaller chicks, than females without helpers. "The females massively under-nourish their eggs if they are breeding in a group," Kilner told LiveScience. "All of the hard work put in by the helpers after hatching, in fact, goes to make up for the lack of investment that the female has put into her egg."

The researchers aren't certain what's in it for the helpers, though one idea is the helper could move in as the dominant male when the current one leaves.

The female wrens living in groups have it "good," in many ways, Kilner said. With little male babysitters, mothers were more likely to survive to the following breeding season than females without helpers.

But that's not all. The dominant male in the nest might even be sort of "duped" into fatherly duties when he's not actually the biological father.

The female superb fairy-wrens typically lay four eggs, one a day, and are considered one of the most promiscuous species in the avian world. And a female will frequently fly off to other nests before dawn to get an egg fertilized by another male.

"She looks really boring compared with the males," Kilner said. "But at the end of the day she's the one that's running the show."