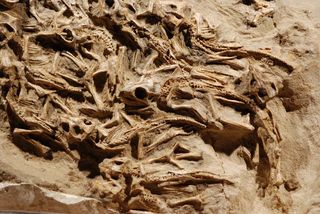 Fastovsky said the dinosaur infants may have been overrun by migrating dunes during a sandstorm. Back when the dinosaurs lived, some 70 million years ago, the area would've been a windblown dune field, where dunes may have reached as tall as 80 feet (24 meters).
(Image: © K. Tsogtbaatar.)

A nest of 15 young dinosaurs uncovered in Mongolia — cousins of Triceratops — now suggests these plant-eating beasts might have cared for their young, scientists reveal.

The dinosaur is named Protoceratops andrewsi, a sheep-size herbivore that lived about 70 million years ago that's known for the frill at the back of its head. Within the nest were infants about 4 to 6 inches (10 to 15 centimeters) long and probably no more than a year old.

"The evidence suggests they may have been overrun by migrating dunes during a sandstorm," researcher David Fastovsky, a vertebrate paleontologist at the University of Rhode Island, told LiveScience.

The searing hot locale in the heart of the Gobi Desert where this nest was discovered, Tugrikin Shire, has proven rich in fossils in the past, including the "fighting dinosaurs," an entombed Velociraptor and Protoceratops seemingly locked in mortal combat. The site was harsh back when these dinosaurs were alive, too — the sandstones they were buried in suggest the region was an erg, a windblown dune field a bit like parts of the modern Sahara. The dunes here might once have reached as tall as 80 feet (24 meters). [Photos of dinosaur infants]

This is the first definitive Protoceratops nest uncovered to date, researchers said. Although scientists had discovered what they thought were Protoceratops nests since the 1920s, opening up the eggs revealed they actually belonged to another dinosaur — Oviraptor, a creature previously suspected to have lurked around these eggs to eat them.

The fact these infant dinosaurs were all found together suggests that Protoceratops parents might have cared for their young at nests during at least the early stages of childhood. In addition, Protoceratops was a relatively primitive member of its group of dinosaurs, the ceratopsians, so suggests that nesting and parental care might have been traits found within other ceratopsians as well, such as Triceratops.

"It's quite striking that there are 15 juvenile Protoceratops here — that seems like a lot to care for," Fastovsky said. "But they were living in a harsh environment, so perhaps mortality rates were high."

The scientists would like to reconstruct the ecosystem where Protoceratops dwelled to better understand the context in which it lived and why it might have adopted the familial strategy it did.

"We don't know what they fed on right now — we don't know what plant life there was," Fastovsky said. "But it was more productive than what we might expect of a dune field, given how many fossils we've found there."

The scientists detailed their findings in the November issue of the Journal of Paleontology.