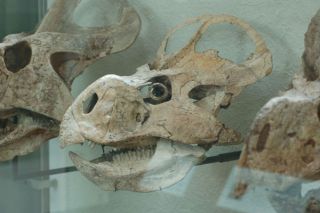 This plant-eating dinosaur, Protoceratops andrewsi, was active day and night, like many other herbivores, both living ones and dinosaurs.
(Image: © Lars Schmitz)

Some dinosaurs didn't go to sleep when the sun went down. Like many living animals, some paleo-beasts stayed awake or woke up to forage or begin the hunt for prey.

This discovery, which relied on evidence within fossilized remains of dinosaur eyes, challenges the conventional wisdom that early mammals were nocturnal, or active at night, because dinosaurs had already taken the day shift.

"When we look at living vertebrates today, living birds, lizards and mammals we see such a great diversity of when they're active during the day," said study researcher Lars Schmitz, a postdoctoral researcher in ecology and evolution at the University of California, Davis.

Some animals today, like us, are active during the day, while others prefer nighttime. Still others are active periodically throughout a 24-hour cycle. So Schmitz said he and colleague geologist Ryosuke Motani asked: "Why isn’t it possible that dinosaurs are nocturnal as well?"

All in the eyes

To find out, they looked into the preserved beasts' eyes. Specifically, they looked at the width of the eye socket, and the dimensions of the scleral ring, a ring of bone that surrounds the iris of the eye in birds, lizards and dinosaurs. (Humans and other mammals don't have this bone.)

Nocturnal animals need to let the maximum amount of light possible into their eyes, so they need a larger opening within the scleral ring. Daytime living species, meanwhile, have much more light with which to see. A smaller opening reduces the amount of energy these animals have to spend constricting their pupils to reduce the amount of light coming in, and it also allows them to see a clear and focused image at a large range of depth, according to Schmitz. [How the Human Eye Works]

Other animals are active at dusk and dawn or at sporadic intervals throughout the day — nowadays this includes large herbivores, like the fallow deer, certain birds, the large hairy armadillo, the Amazon tree boa and even dogs. Their eyes need both acuity and a good sensitivity to light. As a result, they have an intermediate-size scleral ring — among those that have this bone — and an overall larger eye.

Day, night and in between

Among 33 species of dinosaurs living during the Mesozoic era, about 250 million to 65 million years ago, they found a spread of lifestyles that resembled those among modern animals, an indication that dinosaurs too spread out to occupy the available ecological niches.

As with modern flyers, like birds and bats, the majority of the flying dinosaurs — including three pterosaurs and all of the four avian dinosaurs (the ancestors of modern birds) studied — were awake during the day. However, five species of dinosaur fliers were either nocturnal or awake periodically, two of which may have had activity resembling certain nocturnal seabirds.

Most of the plant-eating dinosaurs were awake periodically. For herbivorous animals, like elephants and the herbivorous dinosaur Protoceratops andrewsi, larger size means a need to spend more time foraging and eating. Large animals are also more prone to overheat, so they try to avoid being active during the heat of the day, shifting their activity into nighttime hours, according to Schmitz. [How Dinosaurs Got So Huge]

Predators, both dinosaur and modern, gain an advantage by hunting at night, and all of the dinosaur predators analyzed were either nocturnal or periodically active. The finding could help to set the stage for other dinosaur findings. For instance, fossil evidence has documented an attack by one of these night dwellers, Velociraptor mongoliensis, on the periodically awake Protoceratops. This attack probably happened in the twilight or low-light conditions, the researchers write.

These results indicate that dinosaurs and early mammals did not split the day and night; in fact, it's not yet clear whether early mammals were nocturnal at all, and that idea needs to be evaluated, Schmitz said.

The research appears in the most recent issue of the journal Science.