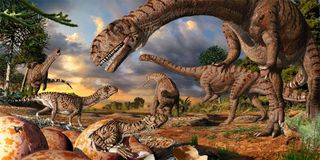 This artist's interpretation shows 190-million-year-old nests, eggs, hatchlings and adults of the prosauropod dinosaur Massospondylus in Golden Gate Highlands National Park, South Africa. While the mother dinos likely were 20 feet (6 meters) long, while their eggs were only 2.3 - 2.7 inches (6 to 7 cm) wide.
(Image: © Artwork by Julius Csotonyi)

The hatchery and the baby footprints uncovered there are significant clues about the evolution of complex family behaviors in early dinosaurs, providing the oldest-known evidence that dinosaur hatchlings remained at nests long enough to at least double in size.

The newly unearthed clutches of eggs, many with embryos inside, belonged to the plant-eating dinosaur Massospondylus, a prosauropod, or predecessor of the largest animals to ever walk the Earth, long-necked sauropods such as Brachiosaurus.

How to unearth a dinosaur egg

"The eggs, embryos and nests come from the rocks of a nearly vertical road cut only 25 meters (82 feet) long," said researcher Robert Reisz, a paleontologist at the University of Toronto at Mississauga. "Even so, we found 10 nests, suggesting that there are a lot more in the cliff, still covered by tons of rock. We predict that many more nests will be eroded out in time as natural weathering processes continue." [Photos of dinosaur nesting sites]

The eggs and nests proved difficult to unearth because the eggshells are extremely delicate at less than 100 microns in thickness, or less than the width of a human hair, making it easy to inadvertently destroy them. "We literally spent days and days searching for the eggs and nests, spending most of our time on our hands and knees, but once we were able to recognize what to look for, we found four nests within 10 minutes," Reisz told LiveScience.

The nests unearthed to date each held up to 34 round eggs in tight clusters. The skeletal remains of the mothers suggest they were about 20 feet (6 meters) long, while their eggs were only about 2.3 to 2.7 inches (6 to 7 centimeters) wide. The mothers carefully arranged these eggs, the researchers say, basing this on the high level of organization of the nests and eggs.

From the fine-grained nature of the sediments holding the eggs, the researchers think the nests were built near a lake or a slow-moving river. "The fact that the nests are relatively close to water, and the soil was moist, suggests that there was lots of vegetation," Reisz said. This likely made the area attractive to these herbivores.

And the site seemed to be a popular one for dino day care, as the nests were found in at least three distinct layers of rock within the excavation, each indicating a different point in time. In fact, the researchers suggest the dinosaur moms likely returned repeatedly to the site. Also, the fact that multiple nests were found within the same layers — and thus were laid at about the same time — reveals the dinosaurs likely gathered in groups to lay their eggs, the oldest evidence of such behavior in the fossil record.

"Even though the fossil record of dinosaurs is extensive, we actually have very little fossil information about their reproductive biology, particularly for early dinosaurs," said researcher David Evans, associate curator of vertebrate palaeontology at the Royal Ontario Museum in Canada. "This amazing series of 190-million-year-old nests gives us the first detailed look at dinosaur reproduction early in their evolutionary history, and documents the antiquity of nesting strategies that are only known much later in the dinosaur record."

The researchers are now slowly uncovering embryos within these eggs. They have embryos in several different stages of development, "allowing us to do actual comparisons between them," Reisz said. "The preservation is exquisite."

The scientists detailed their findings online today (Jan. 23) in the Proceedings of the National Academy of Sciences.