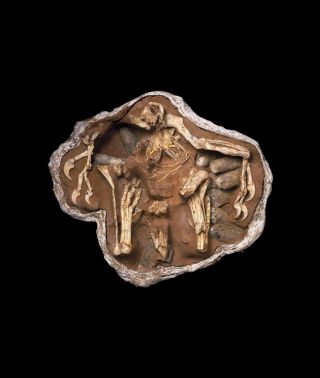 Dinosaurs had sex well before they reached full physical maturity, just as crocodiles and people can, research now reveals.

In birds, which are essentially living dinosaurs, sex begins only after peak adult size. On the other hand, in people as well as crocodiles, alligators, lizards and snakes, sexual maturity can begin after the juvenile growth spurt but well before peak adult size.

To see when dinosaurs began having sex, researchers from the American Museum of Natural History in New York and their colleagues investigated all seven known specimens of dinosaurs that were buried while brooding eggs. These included four oviraptorids, which were small, beaked, birdlike bipeds, and three deinonychosaurs, predators 10 or more feet long that were armed with unusually large, sickle-shaped talons on their feet.

The scientists looked at growth lines in the fossils. Bones can, a bit like tree trunks, record the history of a creature. Lines within the bones reflect a seasonal pause in the animal's growth.

After four years of research, analysis revealed that although five of the dinosaurs had grown to adult size, two had not—one oviraptorid and one deinonychosaur. In other words, the onset age for dinosaur sex apparently matched that of primitive reptiles, findings that are detailed online July 17 in the journal Biology Letters.

"We're always telling kids that birds are like little T. rexes. Now that's true to some level, but not others," Erickson said. "There are some attributes birds got from dinosaurian ancestors, but not others. Birds are really unusual in maturing so late sexually."

Knowing when dinosaurs were capable of sex could shed light on which of the morphological features seen in fossils might be used in courtship displays and other behaviors, Erickson told LiveScience. Coupling these findings with previously collected data can also lead to novel insights into dinosaur life.

For instance, the oviraptorid Citipati osmolskae apparently could reproduce for seven to nine years. Since researchers know this dinosaur laid roughly 20 eggs per clutch, this suggests one Citipati could have laid 140 to 180 eggs over the course of its life. "A lot of these guys wouldn't have made it far down the road—it's very clear now that these animals suffered very serious mortality levels early in life," Erickson said. "Details such as that really help us understand their world better."

Paleontologist Peter Makovicky at the Field Museum in Chicago, who did not participate in this study, said: "It's pretty difficult to get details on reproductive biology out of fossils, since you can't directly observe it, but the group here was able to put together a number of recently found and described fossils to good use in a fascinating piece of work."