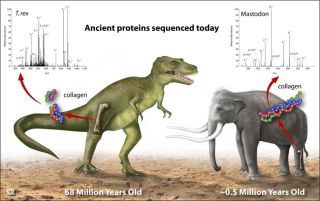 Researchers sequenced proteins from connective tissue found in fossils of a 160,000- to 600,000-year-old mastodon, and from a 68-million-year-old T. rex.
(Image: © Zina Deretsky/National Science Foundation)

And a comparison of the protein's chemical structure to a slew of other species showed an evolutionary link between T. rex and chickens, bolstering the idea that birds evolved from dinosaurs.

The collagen proteins were found hidden inside the leg bone of the T. rex fossil, according to two studies published in the April 13 issue of the journal Science. Collagen is the main ingredient of connective tissue in animals and is found in cartilage, ligaments, tendons, hooves, bones and teeth. It yields gelatin and glue when boiled in water.

"I mean can you imagine pulling a bone out the ground after 68 million years and then getting intact protein sequences?" said John Asara of Beth Israel Deaconess Medical Center and Harvard Medical School, lead author of one of the studies. "That's just mind boggling how much preservation there is in these bones."

The previous record holder for the oldest protein tissue belonged to collagen found in a 100,000- to 300,000-year-old mammoth bone.

The new finding will be viewed skeptically, admitted one of the researchers involved in the two studies. "It's very, very, very controversial because most people have gone on record saying there's an absolute time limit to anything that's protein or DNA," said Mary Schweitzer, a molecular paleontologist at North Carolina State University

Matthew Carrano, a dinosaur curator at the Smithsonian Institution in Washington, D.C., who was not involved in either study, said the protein findings are robust. "Here are the pieces of the protein. If you're going to refute this you have to explain how these pieces got in there," Carrano said in a telephone interview.

"It's not another molecule mimicking the protein and giving off a similar signal. This is the actual sequence."

The T. rex leg bone, which looks like a giant drumstick, was unearthed by Jack Horner of the Museum of the Rockies in 2003 in the Hell Creek Formation, a fossil-packed area that spans Montana, Wyoming and North and South Dakota.

In 2005, Schweitzer and her colleagues reported they had found evidence for soft, stretchy tissue sealed inside the dinosaur's fossilized femur. The finding made headlines, but was also questioned by some experts.

The hard stuff of bones is all that usually remains when a dead organism is buried beneath layers of earth. Usually, microbes devour all the easy-to-access soft tissue. So finding relatively intact soft tissue was a major claim.

"For centuries it was believed that the process of fossilization destroyed any original material, consequently no one looked carefully at really old bones," Schweitzer said.

To gather her evidence, Schweitzer ran chemical analyses, finding the tissue reacted with antibodies from collagen taken from chicken and other avian tissues. Also, images from high-powered microscopes revealed a repeating series of thin stripes characteristic of collagen fibers.

Asara then ran the tiny samples through a mass spectrometer, a machine that measures mass and charge of individual molecules, finding the relic tissue was indeed collagen.

A comparison by Asara's team of the amino-acid sequence from the T. rex collagen to a database of existing sequences from modern species showed it shared a remarkable similarity to that of chickens. Amino acids are the molecular building blocks of proteins; there are 20 of them used by organisms to build proteins, and their precise order is determined by instructions found in DNA.

"I'm grateful that he was able to get the [amino acid] sequences out. That's the Holy Grail," Schweitzer told LiveScience.

This finding supports the idea that chickens and T. rex share an evolutionary link and bolsters previous research showing that birds evolved from dinosaurs and that birds are living dinosaurs.

"Here we have a real molecule from a real dinosaur, and it's much more similar to a bird than it is to anything else," Carrano said.

The discovery will open the door for a suite of studies once thought off limits in the field of paleontology. For instance, proteins could supply more direct evidence about evolutionary links between living and extinct organisms.

"Protein sequences often reflect little bits of the evolutionary history of animals, how they are different or similar among groups," Carrano said. "This can provide information for extinct animals on how they are related through evolution to living groups of animals if we could pull out these kinds of molecules."

Plus, the process of fossilization remains somewhat of a mystery. "This is a really valuable window into [fossilization] because here you have some of the original material preserved," Carrano said.

"We would never have asked a question that required this information in the past and that shut the whole door on those avenues of research. And now they are potentially open to us," Carrano said.