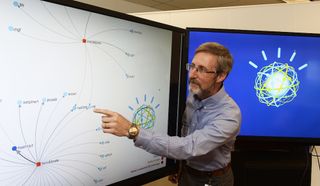 The artificially intelligent computer system is moving beyond answering known questions into a new realm, pushing the boundaries of science by testing hypotheses. The new system, known as the Watson Discovery Advisor, could accelerate the scientific process by sifting through massive amounts of information and visualizing patterns in the data.

But unlike when Watson was on 'Jeopardy!,' its new role as Discovery Advisor is "not about getting to an answer, but [rather] gaining insight into a large body of information," Merkel told Live Science.

Today, more than 50 million scientific papers exist, and new findings are published every 30 seconds, studies estimate. The average researcher only reads about 23 scientific papers per month, or fewer than 300 per year, according to the National Institutes for Health.

But what if Watson could read the papers for you, and spit out useful information? Essentially, this is what Discovery Advisor can do. The system can "ingest" millions and millions of scientific papers, patents, proprietary documents and other data, and help guide researchers to the information they need. Discovery Advisor can also present the information in a visual format called a knowledge graph, which shows the data points and how they relate to each other, Merkel said.

Several research institutions are already using the new Watson system. For example, Baylor College of Medicine in Houston used the technology to identify proteins that modify protein p53, which is involved in preventing cancer. With about 70,000 existing research papers on this protein, a task that would have taken years to complete may take only weeks with Watson, IBM said.

Pharmaceutical and consumer goods manufacturer Johnson & Johnson is using Watson to read and understand the results of clinical trials, in order to determine the effectiveness of certain drugs compared to others on the market. Normally, these tasks are performed by humans, and it typically takes about 2.5 years just to collect the data before the results can then be analyzed.

Watson's computing ability has four dimensions. First there's perception: Watson is capable of reading and understanding English, like it did for 'Jeopardy!', but the computer can also understand visual information, such as molecular structures or MRI scans. "We're teaching Watson to see," Merkel said.

Next, Watson relates that information. On 'Jeopardy!', when Watson was asked a question, the machine would figure out an appropriate answer. Now, Watson is capable of understanding what a user wants, and is able to ask even deeper questions in response to a query.

Then there's reasoning. A typical human brain, when asked a question, immediately develops an initial hypothesis before pursuing others, Merkel said. But Watson explores all options at the same time, and determines the best answer.

Finally, Watson employs sophisticated mathematical models known as machine learning. As the system answers more and more questions, it learns and gets better over time.