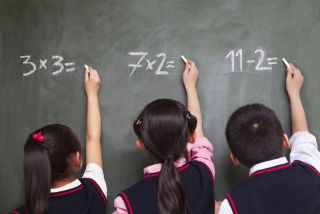 When it comes to smarts, women are catching up to men in some areas and outpacing them in others, new research has found.

In particular, women, on average, are better than men at so-called episodic memory, which involves recalling and describing experiences and facts, while men's edge over women in numerical abilities has narrowed somewhat. The findings were drawn from a large study of older people from 13 different European countries.

Overall, humans have gotten smarter through time. That cognitive leap is thanks largely to better health, education and living conditions, the new study finds.

"When living conditions increase over time, so do cognitive abilities both for men and women, and that has been shown previously," said study co-author Agneta Herlitz, a psychologist at the Karolinska Institutet in Sweden. "But we show that women's cognitive abilities increase more than men's."

Long before Teen Talk Barbie said the words "math is hard," people have debated whether average gender differences in cognition are innate, the product of a sexist society or a little of both. [Busted! 6 Gender Myths in the Bedroom and Beyond]

Studies have consistently shown differences between the average cognitive abilities of men and women. Dozens of studies have found men are, on average, better able to rotate objects in their minds, whereas women do better on tasks associated with episodic memory, meaning they can better recall lists of words or objects.

And a 2013 study in the journal Proceedings of the National Academy of Sciences found that men's and women's brains tend to be wired very differently. An average woman's brain, that study revealed, has more connections between hemispheres, while a man's noggin has more connections within hemispheres. The study researchers speculated that this may make the male brain better at motor skills and the female brain better at combining analytical and intuitive thinking.

But culture clearly plays a big role in creating differences in cognition. Women have historically had fewer educational opportunities. And even when education levels are equal, women may face negative stereotypes. For instance, teachers tend to underrate women's math abilities, even when they perform such skills just as well as men, according to a 2012 study published in the journal Gender & Society. And in more-egalitarian societies, there's a smaller gap in mathematical abilities.

The researchers looked at data from 2006 to 2007 in the Survey of Health, Aging and Retirement in Europe, which included 31,000 men and women who were born between 1923 and 1957 in 13 different European countries. The researchers compared older and younger groups to show how cognition has changed over time.

As part of the study, researchers tested the older adults' episodic memory by asking them to memorize and recall a list of 10 words. The participants also had to name as many different animals as they could in a minute, a task that tests an ability known as category fluency. Finally, the survey tested numeracy, or number sense, with word problems such as: A secondhand car dealer is selling a car for $6,000. This is two-thirds of what it costs new. How much did it cost new? (The answer is $9,000.) [Why You Forget: 5 Strange Facts About Memory]

Across all the cultures, younger people performed better than older participants. People from the northern countries also did better on average than those in Southern and Central Europe, the researchers wrote in the paper, which was published today (July 28) in the journal Proceedings of the National Academy of Sciences.

Women in Northern Europe outperformed men in their recall ability, whereas in Central and Southern Europe, only women from the younger cohorts showed this advantage.

Men outperformed women in the math questions in all regions, though the margin narrowed over time. The math gap between the sexes was much greater for people in Central and Southern Europe. Men and women performed equally well at category fluency in Northern Europe, and women caught up with men for later cohorts in Central Europe.

Though everyone saw improvements over time, the women did so more dramatically. The gains in smarts coincided with better living conditions, as measured by gross domestic product (GDP), fertility rate, health indicators such as mortality rate, and educational opportunities, the researchers found.

Because women's better performance coincided with higher levels of societal development across different regions and cohorts, the results suggest that improved living conditions have benefited women more than men. But the scientists aren't sure whether that trend will continue into the future, as women simply may be "catching up" after starting from further behind, Herlitz said.

There may be sex-specific differences in cognitive improvements with better living conditions, said David Geary, an evolutionary psychologist at the University of Missouri, who was not involved in the study. However, "I don't believe, as they argue, that girls and women will improve more than boys and men across the board. But they will gain more in some domains, including episodic memory, whereas boys and men will gain more in others," Geary told Live Science in an email.

Some small cognitive differences between the sexes will likely persist in the future, but for the most part, men and women's cognitive abilities overlap, said Diane Halpern, the dean of the College of Social Sciences at the Minerva Schools at Keck Graduate Institute in Claremont, California, and the author of "Sex Differences in Cognitive Abilities" (Taylor and Francis, 2000).

The cause for the differences can't be pinpointed to either hard-wired biological differences or cultural factors, Halpern, who was not involved in the study, told Live Science.

"It's not nature or nurture. It's not evolution or culture. It's really some interaction of all those variables," Halpern said.