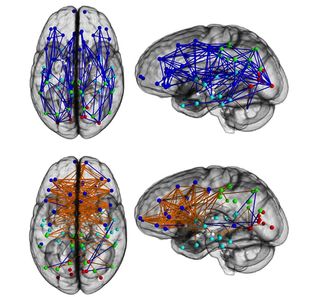 "On average, men connect front to back [parts of the brain] more strongly than women," whereas "women have stronger connections left to right," said study leader Ragini Verma, an associate professor of radiology at the University of Pennsylvania medical school. But Verma cautioned against making sweeping generalizations about men and women based on the results. [10 Surprising Facts About a Man's Brain]

Previous studies have found behavioral differences between men and women. For example, women may have better verbal memory and social cognition, whereas men may have better motor and spatial skills, on average. Brain imaging studies have shown that women have a higher percentage of gray matter, the computational tissue of the brain, while men have a higher percentage of white matter, the connective cables of the brain. But few studies have shown that men's and women's brains are connected differently.

In the study, researchers scanned the brains of 949 young people ages 8 to 22 (428 males and 521 females), using a form of magnetic resonance imaging (MRI) known as diffusion tensor imaging, which maps the diffusion of water molecules within brain tissue. The researchers analyzed the participants as a single group, and as three separate groups split up by age.

"It is fascinating that we can see some of the functional differences in men and women structurally," Verma told LiveScience. However, the results do not apply to individual men and women, she said. "Every individual could have part of both men and women in them," she said, referring to the connectivity patterns her team observed.

When the researchers compared the young people by age group, they saw the most pronounced brain differences among adolescents (13.4 to 17 years old), suggesting the sexes begin to diverge in the teen years. Males and females showed the greatest differences in inter-hemisphere brain connectivity during this time, with females having more connections between hemispheres primarily in the frontal lobe. These differences got smaller with age, with older females showing more widely distributed connections throughout the brain rather than just in the frontal lobe.

The findings could also help scientists understand why certain diseases, such as autism, are more prevalent in males, Verma said.