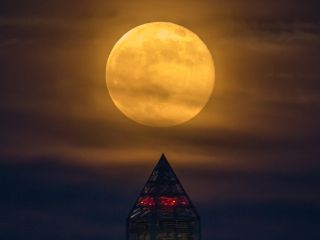 A supermoon rises over the Washington Monument on June 23, 2013.
(Image: © NASA/Bill Ingalls )

You might want to step outside early tomorrow morning (July 12), when a bulging "supermoon" will glow brightly in the sky.

Tomorrow's supermoon, which reaches full phase at 7:25 a.m. EDT (11:25 GMT), will be bigger and brighter than most other full moons this year. It will be the first of three such moons in consecutive months, and the next supermoons will occur on Aug. 10 and Sept. 9, according to NASA.

The moon follows an oval or elliptical orbit, and a supermoon occurs when the moon is in the part of its orbit closest to Earth. At this point, known as "perigee," the moon is about 30,000 miles (50,000 kilometers) closer to the planet than at its farthest point, or "apogee." [In Photos: Glitzy Images of a Supermoon]

Supermoons gained attention last year, when a June 2013 full moon was 14 percent bigger and 30 percent brighter than other full moons, according to NASA. But these monstrous moons aren't all that uncommon, as it turns out.

"Generally speaking, full moons occur near perigee every 13 months and 18 days, so it's not all that unusual," Geoff Chester, an astronomer at the U.S. Naval Observatory in Washington, D.C., said in a statement. "In fact, just last year, there were three perigee moons in a row, but only one was widely reported."

To the casual observer, it's not easy to tell the difference between a normal full moon and a supermoon. Clouds and haze can obscure the supermoon's brightness. "Also, there are no rulers floating in the sky to measure lunar diameters," NASA officials said in a statement.

However, many people looking at the supermoons this summer may be tricked into thinking they're bigger because of an illusion that, for reasons astronomers and psychologists don't fully understand, makes moons look much larger near trees, buildings or other objects near the horizon. Consequently, people watching the moon rise tomorrow may confuse its size and think the supermoon is actually much larger than it is.

In any event, it should be a spectacular sight, weather permitting. For New York City residents, it won't be the only reason to look at the sky this weekend; tomorrow's full moon coincides with "Manhattanhenge," which occurs when the setting sun is aligned along the east-west streets in the grid of Manhattan.

On two sets of consecutive days a year, the sun sets in line with the city streets, casting a glow across the skyscrapers' north- and south-facing edges. The name comes from a similar alignment of the sun at Stonehenge, the prehistoric stone structure in Wilshire, England. This year, Manhattanhenge occurred  on May 29, and New Yorkers will be treated to the stunning sight again tomorrow evening, provided that conditions are clear.

Manhattanhenge will peak tonight (July 11) at 8:24 p.m. EDT, when the full sun will be visible along Manhattan's grid, and tomorrow at 8:25 p.m. EDT, when half of the sun will be visible above the horizon, astrophysicist and "Cosmos: A Spacetime Odyssey" host Neil deGrasse Tyson, director of the Hayden Planetarium at the American Museum of Natural History in New York City, wrote on the museum's website.

The best place to see Manhattanhenge is from as far east on the island of Manhattan as possible, while still keeping New Jersey visible across the Hudson River. Good streets for viewing include 14th, 23rd, 34th, 42nd and 57th streets, and ones that are adjacent, Tyson said. In addition, 34th Street and 42nd Street offer particularly stunning views of the Empire State Building and Chrysler Building, respectively.

Tyson joked that future civilizations may think that Manhattan's layout had some astronomical significance, much like the mysterious Stonehenge.

Editor's Note: If you have an amazing moon or Manhattanhenge photo you'd like to share for a possible story or image gallery, please contact managing editor Jeanna Bryner at LSphotos@livescience.com.