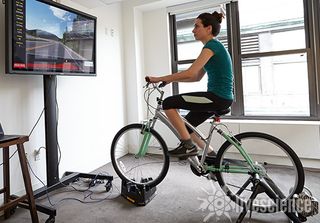 It's possible to cycle in Manhattan along the banks of the Hudson River, or down a California highway that trails the Pacific coastline, without ever leaving your house, thanks to a new cycling system.

Indoor cycling systems have been around awhile, and are often used by professional cyclists for training, but the VirtualTraining softwaresystem from CycleOps has added features that aim to make cycling in the living room appealing to people who'd like to ride a bike just for the fun of it.

The systembrings Google maps, satellite images and videos of the roads together, so that people can take a virtual ride, anywhere in the world.

By connecting the indoor cycling trainer to a tablet or a computer, and subscribing to the company's VirtualTraining software (for $5.99 to $15 per month), you can go online and select and download hundreds of routes from around the world. As you ride, Google Earth data shows where you are on the course, and on a side bar the system displays your cycling speed, distance taken, ride time, heart rate (if paired with a heart rate monitor) and the slope of the route.

You can virtually race against other online users or friends, and in those routes for which video footage is available, you can actually watch the road you're riding and virtually visit places to which you've never been.

"Indoor training no longer needs to be viewed as an act of basement torture. We'd even go as far as saying that indoor training can now actually be, well, fun," the company says on its website.

Can it really be fun? I tested the setup to find out. Here is how it went.

Setting up the virtual cycling system

To set up the virtual cycling system, I had to mount my own bike onto the trainer. The trainer essentially converts a regular bike into a stationary bicycle, and is designed to make it feel as though you are riding on the ground, as opposed to spinning wheels in the air.I used a trainer called Fluid2, which costs $350 and comes mostly assembled. It still needs minor work — such as attaching handles to their places — before you can slide the bike into the trainer.

Next, for the trainer to communicate with the software, I used zip ties to attach a speed and cadence sensor called PowerTap to a spot near the wheel on the bike. The software then calculates your cycling speed by using a spinning, small magnet that you attach to one of the spokes inside the wheel. The cadence sensor is mounted on the bike near the pedals. These sensors wirelessly send the data to the VirtualTraining software on the computer, via Bluetooth.

Attaching the sensors can be a little bit frustrating because they can slide off repeatedly and lose their connection with the magnet, but once I found a good position for them and tightened their ties, they started to work better.

Once you're signed into the VirtualTraining software, you can choose a route from the online database and download it to your computer and begin cycling. You can select a partner, choose to race with another user, or just train on your own. Real-time information about your speed and power (that is, the amount of power you are generating) is shown on the computer screen. A view of the Google map shows your progress on the road, and you can toggle the view with video of the road. (I connected the computer to a TV, to have a larger view of the map and the road footage.)

There are hundreds of routes to choose from (including significant routes such as Ironman race routes, Tour de France, and Gran Fondos), in virtually all corners of the world. Users can also create their own routes and upload them on the maps. There are currently several thousand active users from around the world who use the software, according to CycleOps representatives.

The software also tracks and keeps the data of each course to be reviewed later — for example, race times, calories burned, distance covered — among other information about your performance. [Best Fitness Tracker]

I enjoyed my experience with indoor cycling and the VirtualTraining software, especially when riding on routes that had video footage available. Having the option to actually look at a road made indoor cycling much more interesting than having to stare at a wall, and I was more motivated to push through and finish a route. Also, if you are a competitive person, the ability to race with other users or to compare your stats with those of your friends makes indoor cycling more fun.

Overall, the integrated features in the software can certainly make indoor training a better experience, for athletes as well as everyday people.

The VirtualTraining software currently works on PC as well as iOS and Android tablets. The team members at CycleOps said they are working on a version of the software that also runs on Mac laptop and desktop computers.