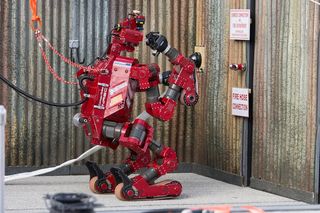 Will robots ever be able to save the day in the aftermath of a tsunami or nuclear meltdown? The U.S. military has been trying to find out.

Through its Robotics Challenge, the Pentagon's Defense Advanced Research Projects Agency, or DARPA, has pushed teams of engineers to build machines that can carry out a series of tricky tasks and navigate a grueling obstacle course in a mock disaster zone.

Next year, the ongoing contest will draw to a close with a final round of competition in Southern California, DARPA officials announced today (June 26). [Images: DARPA Robotics Challenge]

Battle of the bots

The Robotics Challenge Finals will take place at Fairplex — home of the famed L.A. County Fair — in Pomona, California, on June 5-6, 2015. Teams will compete for a $2 million grand prize in what DARPA says will be the most difficult test of the competition yet.

"We're going to try to raise the bar even more than what we had planned from the beginning," Gill Pratt, DARPA's program manager for the contest, told reporters in a news briefing today.

The Robotics Challenge launched in 2012. After a few rounds of virtual trials, DARPA held its first physical trials at the Homestead Miami Speedway in Florida in December 2013. The 17 competing robots had to drive through a designated course, traverse uneven terrain and piles of rubble, clear debris from a doorway, climb an industrial ladder, connect a hose, open different types of doors, cut through drywall with tools, and close a series of valves.

Next year's finals will include similar obstacles but will feature a set of new requirements to make the contest even more difficult. For instance, teams will not be permitted to keep their robots connected to power cords during the various challenges, which will force operators and their bots to work efficiently through the tasks. Human team members will also not be allowed to help the robots get up if they topple over, DARPA officials said.

Furthermore, contest organizers will make communications systems intentionally spotty, to mimic the bad service that first responders are likely to experience in a disaster zone.

Speed will also be a more important factor in the scoring next year, according to DARPA. Whereas participants had four hours to complete their eight tasks last year, the robots will have just one hour this year to run through the sequence of challenges continuously.

Still, engineers have a long way to go before robots could actually be helpful in search, rescue and cleanup efforts after a disaster. Pratt said the public's expectations about the ability of robots tend to be out of step with reality, perhaps because of the way bots are portrayed in sci-fi movies and the fact that many of them are made to look like humans.

Even with state-of-the-art technology, "our robots have something between an insect brain and a mouse brain," Pratt said. While some of today's robots can clean floors or work in a factory without human supervision, disaster response is much more complex and unpredictable.

"It's way, way more difficult than vacuuming a floor," Pratt said. "You have no idea what you're going to find. The environment is very bad. You have to be very innovative in how you deal with it."

DARPA has not yet released its list of eight tasks to be completed during the finals, but one of them will be a surprise, Pratt said. In general, the teams will get less information about the challenges prior to the event, in order to more authentically simulate a disaster situation, he added.

Engineers at SCHAFT Inc., a Google-owned Japanese robotics firm, came in first place during the 2013 trials in Florida for the performance of their two-legged S-One robot. That team decided to pull out of the tournament, forgoing DARPA funding to work on a commercial project, but 11 other teams that competed in the trials will be advancing to the next round in California. Those groups each won $1.5 million in funding to prepare for the finals. Pratt said there will be room for other self-funded robotics teams to register for the contest next year.