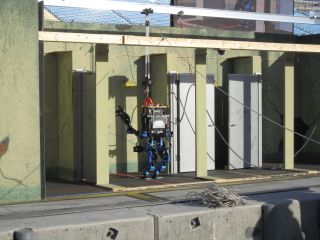 Team Schaft's robot attempts to pull open a weighted door in the final part of one of the tasks on Dec. 20, 2013.
(Image: © Denise Chow/LiveScience)

During the Trials, the robots were evaluated based on their performance in eight physical tasks. These included driving a vehicle through a designated course; traversing across uneven terrain and piles of rubble; removing debris from a doorway; climbing an industrial ladder; retrieving and connecting a hose; opening three different types of doors; using tools to cut through drywall; and closing a series of valves to demonstrate dexterity.

Team SCHAFT's robot, named S-One, scored a total of 27 points in the competition. The two-legged robot weighs 209 pounds (95 kilograms), and excelled at most of the tasks that emphasized mobility and dexterity.

Team IHMC Robotics had an impressive showing during the second day of competition, making efforts to close the gap between the top two teams. When the team's two-legged humanoid robot successfully navigated through three different types of doorways, the robot's engineers and the surrounding spectators erupted into loud cheers and applause.

Team Tartan Rescue, made up of engineers from Carnegie Mellon University and the National Robotics Engineering Center in Pittsburgh, Penn., designed a 400-pound (181 kg) robot, dubbed CHIMP, that resembles a human, but rolls around on rubberized tracks like a tank to give it more stability on uneven terrain.

Here were the final standings of the competition:

DARPA, the branch of the U.S. Department of Defense responsible for developing breakthrough technologies for the military, organized the contest as a way to spur the development of new robots that could one day carry out disaster-response tasks in the aftermath of natural or man-made catastrophes.

The highest-scoring teams will move on to the next phase of the competition, the DARPA Robotics Finals, which will be held 12 to 18 months from now, DARPA officials have said. Teams that move on to the finals will have the chance to compete for $2 million in prize money.