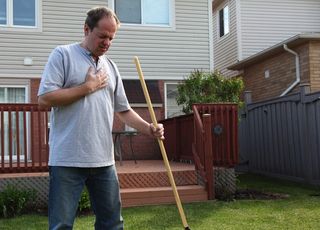 The long-held belief that emotional or physical stress can trigger heart attacks may now have a scientific explanation: In stressed people, heart attacks might be triggered by bacteria dispersing within artery walls, causing fatty deposits in those blood vessels to rupture and clog blood flow, a new study says.

"We don't believe you're going to have a heart attack every time you get excited," said study co-author David Davies, a microbiologist at Binghamton University in New York. "It's more likely that every time there's stress, some small amount of damage is done" that weakens the fibers that hold such deposits onto artery walls, he said.

Heart attacks occur when blood stops flowing properly to the heart, leading to the death of heart muscle. Due to the scarcity of donor hearts and other factors that make heart transplants difficult, half the people who live through a heart attack die within five years.

The major cause of heart attacks is atherosclerosis — the hardening of the arteries — which occurs when fatty deposits, known as plaques, build up in arterial walls. These plaques can rupture suddenly, leading to the life-threatening clogging of blood flow.

Scientists thought that stress might lead these plaques to rupture, but they aren't sure exactly how it happens. [10 Amazing Facts About Your Heart]

The new findings show that bacteria live in plaque-covered arteries. Furthermore, stress may make these bacteria disperse and release enzymes that could destabilize plaques. The scientists detailed their findings online June 10 in the journal mBio.

Davies and his colleagues reasoned that atherosclerosis may be linked to biofilms — slimy fortresses that communities of bacteria often construct for shelter from antibiotics and the body's defenders.

The researchers analyzed samples of carotid arteries — the arteries that carry blood to the head and neck — from 15 patients with atherosclerosis. They found DNA evidence that at least a dozen species of bacteria lived in the walls of every arterial sample tested. Furthermore, each of the five arterial samples large enough for detailed microscopic analysis possessed biofilm deposits.

Six of the 15 plaques analyzed had signs of a bacterium called Pseudomonas aeruginosa, which is commonly found in soil and water. "When Pseudomonas is found in the mouth, skin or gastrointestinal tract, it doesn't seem to cause problems, but in puncture wounds, it can be life-threatening, and in eyes, it can form biofilms and lead to blindness," Davies said.

In experiments, Davies and his colleagues found that biofilms of Pseudomonas that were grown in the lab, on the inner walls of silicone tubes, dispersed when they were given norepinephrine — a stress hormone responsible for the fight-or-flight response in humans — at levels that would be found in the body after stress.

"This dispersion is a coordinated response — most to all of the bacteria in the biofilms carry out this behavior at the same time," Davies said.

Since biofilms are closely bound to arterial plaques, the investigators suggested that the dispersal of a biofilm could also disrupt arterial plaques and, in turn, trigger a heart attack. "All of the samples we have looked at appear to be ticking time bombs — all those bacteria must have some medical consequence," Davies said.

The growth of bacteria in the human body is often limited by how little iron flows freely in the blood, but the hormone norepinephrine causes levels of free iron in the blood to spike. When free iron levels rise, the bacteria in biofilms disperse to pursue the nutrient. To disperse, the microbes release enzymes to escape from their sticky biofilms, and the researchers suggest these enzymes could also partially digest and weaken nearby tissues that normally prevent arterial plaques from rupturing into the bloodstream.

Future research is needed to confirm whether stress actually does trigger plaque rupture in humans.

It also remains unknown whether these bacteria simply take advantage of existing plaques as shelter within the body or whether they might actually help plaques develop and grow. "There's a lot of controversy and contradictory results on that subject," Davies said.

The scientists are now examining other bacteria found in plaques that demonstrate the same behavior. Moreover, they are also investigating which enzymes bacteria release when they disperse, and what effects these enzymes have on surrounding tissues.

These new findings suggest that when dealing with heart disease, "management of bacteria within an arterial plaque lesion may be as important as, or potentially more important than, managing cholesterol," Davies said.