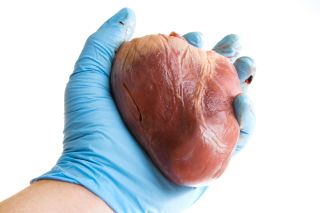 The human heart is about the size of a fist.
(Image: © tlorna | Shutterstock)

Freelance writer Marlene Cimons is a former Washington reporter for the Los Angeles Times who specializes in science and medicine. She writes regularly for the National Science Foundation, Climate Nexus, Microbe Magazine, and the Washington Post health section, from which this article is adapted, and she is an adjunct professor of journalism at the University of Maryland, College Park. Cimons contributed this article to Live Science's Expert Voices: Op-Ed & Insights.

A few weeks ago, Thomas Cook celebrated an unexpected milestone, having lived as long with a donor heart as he had with his own. In reality, however, the new heart became his own the moment surgeons transplanted it inside his chest 25 years ago.

"His body and his heart have become one," says Steven Boyce, surgical director of the heart failure and heart transplantation program at MedStar Heart Institute at MedStar Washington Hospital Center, where Cook's transplant took place on Feb. 1, 1989. "We don't know why. It's very unusual when the body accepts a new organ and says, 'Hey, you're me.' His body just accepted the organ and never caused a fuss."

Cook, 50, is among the longest-surviving heart transplant recipients on record. Even more remarkable, Cook has never experienced any significant rejection episodes or other major medical complications that can occur after heart transplantation. He takes anti-rejection medicine, as all transplant patients must, but they have caused few problems.

"I've done nothing but live my life," he says. "I've had ups and downs, but I'm enjoying the feelings of being alive. I'm happy to have them. It's part of the cycle of life, and I'm happy to still be in that cycle."

On Feb. 19, when Cook arrived at the hospital for his annual checkup, the physicians, nurses and other staff involved in his care — as well as the mother of his heart donor — surprised him with 25 red heart-shaped balloons, a heart-shaped cake, plates of heart-shaped sugar cookies, and a heart made of crystal engraved with "25 years strong."

"It's not too often that someone who's had a heart transplant drops by to visit on his 25th anniversary," Boyce says.

No one knows how many heart recipients survive 20 or more years after transplantation. The United Network for Organ Sharing (UNOS), a nonprofit that matches available organs with recipients nationwide, began collecting data on survival rates only in 1987.

UNOS estimates that about one of every six heart recipients transplanted before 1994 has survived 20 years or longer, and Boyce believes "the odds of living 25 years with a heart transplant are not even one in 10." About 100,000 people have undergone heart transplantation worldwide.

According to the U.S. National Heart, Lung and Blood Institute, the 10-year survival rate for heart transplant surgery is about 56 percent.

Survivors often face post-surgical complications including primary graft dysfunction, which occurs when the new donor-heart fails to function during or after implantation, and rejection, where the host's immune system attacks the donated organ. Patients also may experience cardiac allograft vasculopathy, when the new heart's coronary arteries — each donor heart comes with its own coronary arteries — develop blockages.

In addition, side effects from immunosuppressant drugs can result in kidney damage, infections and cancer.

Yet heart transplant patients are living longer and better lives today, thanks to improvements in drugs such as cyclosporin and the increasing use of left ventricular assist devices, which keep patients alive and healthier until a donor heart becomes available.

"Immunosuppression is so much better, and we have fantastic new technology, and that's what's made all the difference," says Irving L. Kron, a spokesman for the American Heart Association and a thoracic and cardiovascular surgeon at the University of Virginia Health System in Charlottesville. "There's a really good chance that people will be around in 20 or more years."

That wasn't the case when Cook had his surgery. "Even though cyclosporin was available then, we were still learning how to use it, how much to give," says Samer Najjar, medical director of the Advanced Heart Failure program at MedStar Washington Hospital Center. "Give too much and the patient could get an infection. Give too little and he could experience rejection."

In Cook's case, youth was in his favor, since many patients receiving heart transplants in the 1980s were in their 60s and typically in poorer health than patients in their 20s.

When Cook was 4 years old, doctors discovered that he had a heart valve problem. When he was older, he was given a diagnosis of Marfan syndrome, a genetic disorder that often causes heart problems.

By the time he was 25, Cook needed surgery to replace his aortic valve and his ascending aorta, a blood vessel that rises up from the heart. He suffered a heart attack during the procedure, which caused further damage and left transplant as his only option. "I was out of it, but I was told that I went through several dozen code blues" — meaning he needed immediate resuscitation — "and was clinically dead 40 times," Cook says.

At about the same time, Jeffrey Lord Brown, 27, lay with a broken neck in Prince George's Hospital Center — then called Prince George's County Hospital — after a motorcycle accident. Previously he had signed up to be an organ donor.

On Feb. 1, 1989, after Brown was declared brain-dead, Cook, still in the hospital after his heart attack, received Brown's heart.

Cook spent a month in the hospital after the transplant. "They opened my chest three times," he says. "The first was for the initial surgery [for the aortic work]. The second was for the transplant. Then, at some point I had some internal bleeding, so they had to open me up a third time to stop the bleeding. After they closed it the third time, it's never been opened again."

Cook worked for 14 years after the surgery as a truck driver and dispatcher before retiring on a disability not related to his transplant.

For nearly 10 years, he did not know the identity of his donor. Likewise, Susan I. Knight, Brown's mother, did not know who had received her son's heart. They finally met in 1998 after she asked the Washington Regional Transplant Community in Annandale to bring them together. The organization contacted Cook, who readily agreed to meet.

"I was all for it," he says. "I was busy living and often thought about the donor family. But in 1989, I was told they don't do such things."

When they got together, he recalls, "it was very emotional. She brought some pictures of Jeff, so that was my first time seeing him."

They hugged, and she stood at his left side for photographs. Cook is 6-foot-5. She is a foot shorter, which placed her chest-high to him. "I could hear the heart beat," she recalls of that first meeting. "It was just wonderful."

Today, Knight, 73, a supermarket cashier who lives in Annapolis, considers Cook, who lives in Sharpsburg, Md., another son. He calls her "Mother Sue." She attended his 1999 wedding, and their families get together at least once a year. "She lost a child, but found one in me," Cook says.

In an odd coincidence, Knight notes that her great-great-grandfather's name was Thomas Cook. "I think it was meant to be," she says.

"Jeff was a gentle spirit who played the piano some, and the guitar, and loved to ride his bike, just like Tom," she adds, referring to the two men's love of motorcycles."I feel like Jeff and Tom knew each other before they came to Earth, and Jeff told Tom: 'If you need my heart, I'll be there for you.' "

Cook helped raise the two sons of his wife, Sheila, as well as six foster children, including one whom he regards as a daughter and gave away when she married. He also volunteers as an advocate for organ donation. "I've beaten most of the odds and am amazed at the wonderful life I've had," he says.

While most people dread getting old, Cook welcomes it. "I'm feeling it, and it's okay," he says. "I want to get old. I hope to be back to celebrate 50 years."

Author's note: Currently more than 120,000 people in this country are awaiting organ transplants, and thousands more need of tissue and cornea transplants to restore their mobility and sight. Register to be an organ, eye and tissue donor when you obtain or renew your driver's license, or by logging onto www.donatelife.net.

The author's most recent Op-Ed was "Americans' Mental Health is Latest Victim of Changing Climate." This article was adapted from " Living with someone else's heart in his chest, he reaches a 25-year milestone feeling good" in the Washington Post.  The views expressed are those of the author and do not necessarily reflect the views of the publisher. This version of the article was originally published on Live Science.