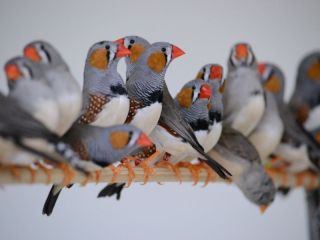 Zebra finches are socially monogamous, meaning that each bird pairs up with a single mating partner for the rest of its life.
(Image: © Huet des Aunay)

Male zebra finches prefer to form lifelong pair bonds with other males if they're raised by their dad alone, new research shows.

This mate choice is likely the result of males "imprinting" on their fathers, researchers say.

Zebra finches are socially monogamous, meaning that each bird pairs up with a single mating partner for the rest of its life. These tiny birds are also known to form lifelong same-sex pair bonds, though scientists aren't sure what factors influence the sex of the birds' partner choice.

In the new study, published in the June issue of the journal Animal Behavior, researchers tested the mate choice of male and female zebra finches raised in the absence of adult females. Of the birds that formed pair bonds, 75 percent of the males and none of the females paired with members of the same sex. In comparison, all of the pair-bonded males and females that were reared by a mother and a father preferred opposite-sex mates. [Same-Sex Partners: 10 Tales of Gay Animals]

"And it wasn't as if the males raised by their dad alone were outcompeted by the males raised by both parents," said study lead author Sunayana Banerjee, a psychologist at Cornell University in New York. "They were actively looking for other males to bond with."

Among animals, sexual imprinting is a common phenomenon, in which younglings learn the features of another individual and use this learning to inform their mate choice during adulthood, Banerjee told Live Science. By imprinting on a mother or father during early development, offspring acquire their preferences for future mates.

Previous research has shown that zebra finches' mate choices are also steered by sexual imprinting. For instance, one study found that females prefer partners with blue feather ornaments if their fathers had such a feature. And in another experiment, males with mothers that had a certain beak color preferred female partners with beaks that were more extreme in color than their mothers' beaks.

To see if parental imprinting also guides same-sex partner choices, Banerjee and her co-author Elizabeth Adkins-Regan, a behavioral neuroscientist at Cornell University, studied the development of two groups of zebra finches. In the control group, chicks grew up having both a mother and father. For the second group, the researchers removed the mothers from the nest shortly after the eggs hatched. [Top 10 Swingers of the Animal Kingdom]

Once the chicks became independent, the researchers moved them to unisex aviaries, which were within ear and eye distance of each other. They then weighed the birds, and found that the mother-deprived chicks didn't suffer from any nutritional deficiencies.

Banerjee and Adkins-Regan then conducted pair-bond tests by moving groups of the birds into aviaries with biased sex ratios. In experiments where they wanted to test the partner preferences of males, they used aviaries that had twice as many males as females; the opposite was true for experiments looking at the preferences of females. The skewed sex ratios ensured that the birds had to compete — through songs and aggression — for their partners.

"Apart from the courtship and pairing behaviors, [the mother-deprived males] didn't seem to have any behavioral differences that were obvious," Banerjee said.

Without their dads, the male offspring didn't learn normal songs and were likely less attractive to females, so they paired with other males. The female offspring, on the other hand, may have imprinted on their mothers during development, Adkins-Regan reasoned.

Banerjee suspects the way males and females choose mates may explain why the same-sex partner preferences appear stronger for mother-deprived males than for father-deprived females. "It could be that females are less dependent on visual cues than males are," Banerjee said, meaning that even after imprinting on their mothers, females would still seek out mates that have the best songs.

Whatever the case, if sexual imprinting is behind the same-sex preferences in zebra finches, brain-imaging studies are necessary to really flesh out the link, Banerjee said.

Importantly, studies have also suggested that humans are susceptible to sexual imprinting. For instance, men often date women who resemble their mothers, and women date men who resemble their fathers, according to research published in 2009 in the journal Proceedings of the Royal Society B.

But the results of studies on sexual imprinting in animals, including the current one, don't have much to say on human sexuality, Banerjee said. "Human mate choice is so much more complex."