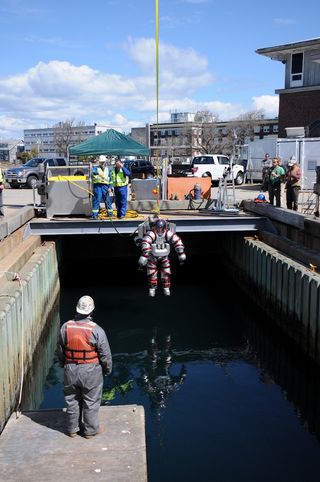 Operators can quickly haul the Exosuit up from hundreds of feet below the surface without the risk of decompression sickness.
(Image: © Courtesy of Brendan Foley)

A treasure trove of bronze and marble statues, gold jewelry and ancient scientific instruments may be buried in sand, hundreds of feet below the Aegean Sea, and a team of explorers is going after the 2,000-year-old hoard using the most advanced diving suit ever built.

Later this year, scientists and divers plan to explore the so-called Antikythera shipwreck, which settled on the seafloor around 50 B.C. off the coast of Antikythera, a Greek island. The team's secret weapon is a 6.5-foot-tall (2 meters), 530-pound (240 kilograms) metal diving suit equipped with 1.6-horsepower thrusters that can reach the extreme depths where the ship came to rest.

The so-called Exosuit's maiden mission will take place in July, when scientists will use the suit to observe and collect bioluminescent organisms off the coast of Rhode Island. If all goes well, the suit will be brought to Greece in September. [See Photos of the Exosuit and Antikythera Shipwreck]

Brendan Foley, a maritime archaeologist at the Woods Hole Oceanographic Institute in Massachusetts and co-director of the Antikythera mission, thinks the ship's entire main cargo hold is buried under layers of sand. Previous explorations have only scratched the surface of what the shipwreck might hold, but the Exosuit will make an extensive exploration possible, and the mission could unearth some incredible artifacts.

"It's likely that sediment will hold the kind of stuff we can't even imagine," Foley told Live Science. "Our eyes light up thinking about it. It's the kind of thing that wakes you up in the middle of the night. These are artifacts that have never been seen since the time of Caesar."

History of the wreck

The ancient shipwreck remained hidden until 1900, when Greek sponge divers first spotted it off the coast of Antikythera. Among statues, gold jewelry and other luxury goods, the sponge divers pulled the world's oldest known computer from the wreckage. Scientists believe the device, called the Antikythera mechanism, functioned as an analog computer that could predict eclipses, phases of the moon and other astronomical events. It predates all other computing devices by almost 1,000 years.

Aside from a brief mission in 1976 led by Jacques Cousteau, the shipwreck has remained undisturbed until now.

The wreck spans an estimated area about 130 feet (40 m) long and 33 feet (10 m) wide, located precariously just west of  a steep vertical drop. The first exploration in 1900 almost sent the whole ship tumbling over the edge, said Foley, and some artifacts might have slipped down the trench over time. The team will use the Exosuit, made by the Vancouver-based company Nuytco Research, and other high-tech diving equipment to reach the bottom of the trench, which could be around 400 feet (120 m) deep.

Preparing for the excavation

Before they start unearthing treasures, the team will map the wreck as precisely as possible. An underwater robot with two cameras mounted side by side will roam the murky bottom for a few days and map the wreck in 3D. [The 7 Most Extreme Jobs in Science]

"This is the most important part of the project, actually," Foley said. Without a detailed map of the wreckage, the team risks disturbing delicate artifacts.

Once they have a visual of the area, divers in regular SCUBA gear will plunge down to the wreck with handheld metal detectors and a bag of tiny plastic flags. This part of the mission, Foley said, "is not so high tech." The divers will sweep the wreck site, and every time they get a hit on their metal detector, they'll plant a flag in the sediment. Then, they'll send the robot back to map the flags.

"All we really want to know is roughly where things are, where concentrations of things are, then we can start the excavation," Foley said.

The first diving excavators will be equipped with a closed-circuit rebreathing system that absorbs the carbon dioxide from each exhaled breath and allows the user to breath in the unused oxygen from each breath. The rebreathers will give the divers at least 30 minutes of bottom time. Then the team will bring out the big guns — the Exosuit that allows for virtually unlimited bottom time.

Pieces of the Antikythera shipwreck could be hidden at depths of 400 feet (120 m). The sponge divers in 1900 could only reach depths of about 150 feet (50 m) and could only stay below the water's surface for a few minutes at a time. In contrast, a diver in the Exosuit can safely reach up to 1,000 feet (300 m) and can potentially stay submerged for up to 50 hours; a cable connecting the suit to the surface cycles out carbon dioxide and filters in new oxygen.

The suit also protects against decompression sickness, or "the bends." Divers, and even some sea creatures, get the bends when they swim to the surface too quickly and the rapid change in water pressure creates nitrogen bubbles in the blood. Divers using the rebreathers can only spend 30 minutes below, because it takes them about an hour and a half to resurface to ensure their bodies have time to adjust to the pressure change.

Here, the Exosuit again has an advantage. Operators on the ship can haul the user up to the surface in just two or three minutes since the wearer will not feel any pressure change in the metal suit.

The high-tech suit also offers advantages over remotely operated vehicles (ROVs). Unmanned ROVs commonly used to explore shipwrecks can't collect the delicate corroded artifacts that a diver can, and the Exosuit is equipped with claws for hands that will allow the wearer to sift through sediment and grasp any unearthed treasures.

"If we find what we think we're going to find, we're expecting this to turn into a five-year project," Foley said.