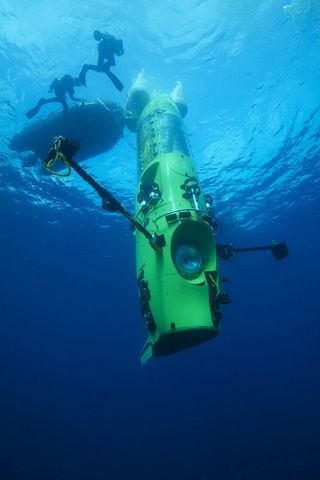 The Deepsea Challenger submersible begins its first 2.5-mile (4-km) test dive off the coast of Papua New Guinea. The sub, carrying James Cameron, descended to the deepest part of the Mariana Trench, at a cavernous depth of 6.8 miles (10.9 km).
(Image: © © Mark Thiessen/National Geographic)

From Herman Melville's "Moby Dick" to Jules Verne's "Twenty Thousand Leagues Under the Sea," the ocean has long been a subject of deep wonder and mystery.

For most of human history, this vast watery abode — which covers 70 percent of the Earth's surface — remained unexplored. But in recent decades, technology has begun to give humans a glimpse of the deep sea landscape. Submersibles can carry people to the deepest depths of the seafloor; and autonomous vehicles can now map a geography never seen by human eyes.

"Technology has played a role in exploring and understanding the ocean for thousands of years, and it will continue to do so," said Andrew Bowen, director of the National Deep Submergence Facility at Woods Hole Oceanographic Institution (WHOI) in Massachusetts.

Traditionally, humans have investigated the ocean from ships on its surface. But to really understand what it's like inside, one needs to be inside it. And what better way to experience the watery abode than in a manned submersible? One of the world's first deep-sea human submersibles, Alvin, was built in 1964. Alvin made more than 4,400 dives, including dives to find a lost hydrogen bomb in the Mediterranean and exploring the wreck of the Titanic. The sub, which is owned by the U.S. Navy and operated by WHOI, can carry three people at a time (two scientists and a pilot) and travel to a depth of 14,800 feet (4,500 meters) on dives that last six to 10 hours. [Infographic: Tallest Mountain to Deepest Ocean Trench]

Film producer and director James Cameron garnered world attention recently when he descended to the deepest part of the Mariana Trench, at a cavernous depth of 6.8 miles (10.9 km), in a submersible he helped build called the Deepsea Challenger. Humans had only made that trip once before, when Jacques Piccard and Navy Lieutenant Donald Walsh piloted the deep-diving vehicle Trieste there in 1960.

"Humans are still the best 'package' with regard to understanding an unknown environment," Bowen told LiveScience. Human powers of observation and reason are valuable tools, he added.

Even so, some aspects of ocean exploration are best left to robots. Remotely operated vehicles, or ROVs, are unmanned vessels controlled by scientists onboard a ship, via a tether cable. WHOI's ROV Jason is a two-part system. Pilots send commands and power to a vehicle called Medea, which relays them to Jason. Jason sends back data and live video to the ship. The ROV contains sonar equipment, video cameras and still cameras. Jason has manipulator arms for collecting samples of rock, sediment or ocean life to return to the surface. The Monterey Bay Aquarium Research Institute (MBARI) in California has two similar ROVs, Ventana and Doc Ricketts, which researchers there use to survey underwater volcanoes and study as-yet-unseen marine life. [In Photos: Spooky Deep-Sea Creatures]

Autonomous underwater vehicles, or AUVs, are another vitally important class of oceangoing robots. These vehicles can navigate vast distances and collect scientific data without any human control. WHOI's AUV, Sentry, can survey the mid-ocean or explore the seafloor, descending as far as 19,700 feet (6,000 m). The vehicle can generate detailed maps of the seafloor using sonar, and take photographs of mid-ocean ridges, deep-sea vents and cold seeps (regions where methane and sulfide-rich fluids leak from the seafloor). AUVs also measure physical characteristics of the ocean, such as temperature, salinity and dissolved oxygen.

Now, engineers are developing hybrid robotic vehicles, like WHOI's Nereus, that can function as either a remotely operated vehicle or autonomous underwater vehicle. Nereus' first mission was to explore the Challenger Deep, the deepest stretch of the Mariana Trench (a region deeper below sea level than the height of Mount Everest).Using AUVs, MBARI scientists mapped volcanic features in the Gulf of California, Mexico. They also detected several expanding oxygen minimum zones — low-oxygen regions that drastically affect biological communities — in Monterey Bay, Calif., and other places. One of the institute's AUVs is currently being deployed to the Canadian Arctic, where it will study the release of greenhouse gases from icelike solids called gas hydrates in the seafloor sediment, which accelerate global warming.

While robotic vehicles provide a singular view of the ocean, they only see a snapshot of the ocean environment.

To monitor the oceans for extended periods, scientists need instruments capable of sampling the marine milieu continuously. Scientists have developed a suite of sensors to do everything from measure water temperature and acidity, to image plankton, to record whale calls.

"The ocean is big, it's dynamic, and it changes a lot," said Steve Etchemendy, director of marine operations at MBARI. "It's hard to see what's going on unless we can stay with a body of water."

Profiling buoys can travel down to 330 feet (1,000 m) and drift freely, measuring chemical signatures and then ascending to the surface to transmit data back via satellite. MBARI uses these to monitor the health of the Southern Ocean, near Antarctica. The Southern Ocean produces the bulk of the oxygen that Earth gets from the ocean, Etchemendy told LiveScience.

Underwater observatories offer perhaps the most permanent way of studying the deep sea. For instance, MBARI has one called MARS, the Monterey Accelerated Research System, which sits on the seafloor 3,200 feet (980 m) deep. Instruments can be plugged into ports in the observatory to monitor seismic faults, for example.

All of these technologies — from submersible vehicles to underwater observatories — are meant to provide access to the ocean, Bowen said. As with any unexplored frontier, "persistence in the ocean is something that’s really important," Bowen said.

Editor's Note: This story was updated at 9:20 a.m. ET on Tuesday, July 16 to correct the number of people the Alvin submersible can accommodate (three, not two, as previously stated).