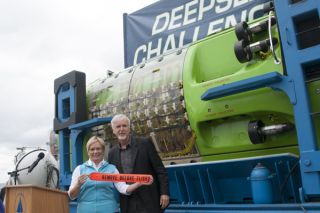 WOODS HOLE, Mass. —When James Cameron was about 12, he saw the Alvin submersible on the cover of National Geographic and was absolutely captivated by the vehicle's ability to transport ordinary humans to the seafloor. Alvin helped inspire Cameron to pursue a life of exploration and, several decades later, to build his own sub — the Deepsea Challenger — and pilot it by himself to the deepest part of the world's oceans.

Cameron visited the Woods Hole Oceanographic Institution (WHOI) today (June 14), a bastion of marine science here on Cape Cod that operates Alvin (still kicking nearly 50 years after being built). But it was no ordinary visit — Cameron came to donate the Deepsea Challenger, which will now be housed where Alvin used to reside. "What's surreal about this situation … is that it all comes full circle," Cameron said at a ceremony celebrating his gift of the sub to the institution.

Cameron and a team of collaborators in the United States and Australia designed the submarine over the course of seven years. It has many unique features that set it apart from any submersible in the world, such as its unique lighting systems and compact, powerful batteries, whose innovative design will be used in other crafts to further explore the ocean, said Susan Avery, WHOI's president.

"Put some gas in it and go and have some fun, but be back by midnight," Cameron joked as he officially handed off the sub.

A large group of curious scientists and residents gathered to hear Cameron, who addressed students from the town's Chatham Middle School. He encouraged them to pursue their passion, just as he did after being inspired in part by Alvin, one of the world's first deep-ocean submersibles. "Follow your curiosity and the things that interest you," he told the students. "The important thing to remember is that some of them may seem impossible," he said. "But you can set yourself down a path to get there and do the impossible."

Cameron fielded questions from the students, including one he'd never got before: Could the craft survive in space? He said it probably couldn't because it is designed to withstand crushing pressures, and not the lack of pressure. "I always love kids' questions," Cameron told LiveScience. "One thing they don't ask is why you did this. For a kid it seems natural to get in a submarine and explore the bottom of the ocean."

The stop here in Woods Hole is the end of a cross-country tour for Cameron with the submarine, during which he's brought it to different cities for students and kids to see. A large part of the inspiration for the trip was to get kids excited about science, Cameron said.

Rob Childs drove the truck that hauled the Deepsea Challenger across the country. He said Cameron's people called him out of the blue shortly before the tour. Childs never knew that the ocean's deep trenches take up an area the size of North America, a fact that Cameron likes to mention to show how little the ocean has been explored. "I've got a whole new outlook," Childs said. "Who'd have thought there was such a large area we haven't explored?" [Video: James Cameron's Dive to Earths' Deepest Spot]

The penultimate stop of the trek took place in Washington, D.C., where Cameron testified before a Senate subcommittee on the importance of funding for ocean exploration. While he received encouraging responses from Sen. Sheldon Whitehouse, D-R.I., and Rep. Nancy Pelosi, D-Calif., his appeals didn't result in any concrete results, due to a lack of funds. "Funding for ocean exploration continues to decrease," he told LiveScience at the event today. "We've still got some educating to do."

Visitors to WHOI got to see the green submersible, and a replica of the relatively tiny compartment Cameron crammed into during his 12-hour voyage to the Challenger Deep, which is 35,787 feet (almost 11,000 meters) beneath the ocean surface in the Mariana Trench.

Cameron's dive returned with a small sample of sediments from the ocean bottom. It would have been much more, but a malfunction dumped out most of the collected sediment as the sub surfaced. Nevertheless, the expedition has so far turned up 68 new species, mostly microbes, he said.

Cameron's dive also turned up microbial mats — strange-looking, filament-like clumps of microorganisms — on the seafloor. Researchers have speculated that a similar setup could have sparked the chemical steps that led to the development of life on Earth, Cameron said. The dive also revealed the presence of giant single-celled amoebas called xenophyophores — bizarre creatures that are among the biggest cells known to humans — near the Challenger Deep.

It's the end of a long road for Cameron, but only the beginning for Woods Hole, which will use the sub for ocean exploration and to guide construction of new submersibles. Cameron will be focusing on making the "Avatar 2" and "Avatar 3" films in the next few years, but he plans to go back to the deep sea eventually.

"It's been an amazing journey," Cameron said.