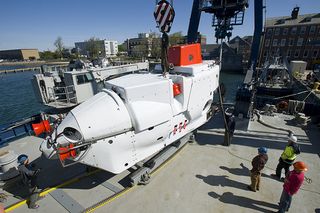 The upgraded submersible Alvin is loaded onto the R/V Atlantis on May 13, 2013.
(Image: © Tom Kleindinst, Woods Hole Oceanographic Institution)

Alvin the submersible is going on a cross-country journey after a $41 million upgrade.

The scientific sub has a storied career in deep-ocean research. Its famous voyages include a trip to survey the wreckage of the Titanic in 1996 and to discover a lost hydrogen bomb in the Mediterranean Sea in 1966. It has explored the Deepwater Horizon oil spill area in the Gulf of Mexico as well as deep hydrothermal vents in the Pacific Ocean.

Alvin is currently headed to Astoria, Ore., for a series of dives to test its new titanium sphere. Before the upgrade, the U.S. Navy-owned Alvin could travel 14,760 feet (4,500 meters) beneath the ocean surface. The new bells and whistles extend that range to 21,325 feet (6,500 m).

At that depth, Alvin will have access to 98 percent of the ocean, upgrade project leader Susan Humphris of the Woods Hole Oceanographic Institution told LiveScience in July.

The research vessel Atlantis left Woods Hole in Massachusetts on Saturday (May 25) with Alvin aboard. The Atlantis and its cargo will travel through the Panama Canal to reach Oregon on June 20.

"This is an important moment in the long process of building the sub and bringing it back online," Susan Avery, the president and director of Woods Hole, said in a statement. "Alvin is a cornerstone of U.S. deep-ocean research, enabling untold scientific discoveries and greater understanding of our ocean. We're eager to have it back in service."

After a series of test dives off Monterey, Calif., this September, Alvin will take a cruise in November to ensure its systems are functioning properly. It will then return to service in December.

Alvin's new 3-inch-thick (7.6 centimeters) titanium sphere can hold a pilot and two scientists. It has a slightly larger interior than the sub's previous quarters and five viewing ports for visibility. In the upgrade, Alvin also received upgraded lighting and an improved command and control system.

The R/V Atlantis also received an upgrade for its job as submersible carrier. The changes included a strengthened A-frame, the structure used to launch the sub and haul it back onboard, and a renovated hangar for Alvin's storage.