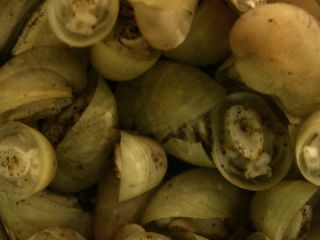 After a deep-sea dive, researchers found they had been transporting these limpets, Lepetodrilus gordensis, between sites.
(Image: © Todd Haney)

Wherever humans go, we seem to carry stowaways with us. This is how fire ants arrived in the southern U.S., how rats traveled to remote islands and how exotic seeds, fungi and insects are showing up in Antarctica.

Now, scientists have found that even the floor of the deep sea, one of the most extreme environments on Earth, is no exception.

After taking the manned submersible vehicle Alvin under the northeastern Pacific Ocean at the Juan de Fuca Ridge, a team of researchers found 38 deep-sea limpets, marine mollusks in the sample they had collected.

The problem was that the these creatures belonged to a species, Lepetodrilus gordensis, that lives near hydrothermal vents, where hot, mineral-rich waterpours into the ocean. But the site Alvin had just visited had no vents.

In fact, this particular limpet is only known to live on Gorda Ridge, about 395 miles (635 kilometers) south. This was also the site of Alvin's previous dive.

To confirm their suspicions, the researchers ran a number of tests on the limpets, including a genetic analysis. The results all pointed to one conclusion.

"We discovered that the individuals must have been transported from the Gorda Ridge by our submersible," said lead researcher Janet Voight, from the Field Museum of Natural History in Chicago, in a statement. "Even though we clean the submersibles after sampling, we had assumed that the extreme pressure change would kill any species which are missed."

But the limpets were tough; when discovered, they appeared healthy, the team writes in research published online Wednesday (May 23) in the journal Conservation Biology.

"Our failure to completely clean the gear on the subsea vehicle meant we could have introduced the species and any diseases it carried to a novellocation," they write, adding that the results suggest that even these nearly inaccessible communities of living things may be vulnerable to changes brought by humans.