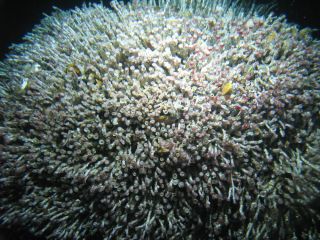 An exploration of a deep-sea vent ecosystem off Costa Rica's west coast reveals a thriving ecosystem with Volkswagon-size "bushes" of tubeworms.

The spot is intriguing to marine researchers in that it blends facets of deep-sea heated vents with cool methane seeps. Scientists knew there was a high concentration of methane in the water in the area, which isn't unusual in geologically active zones where subsurface methane gets squeezed to the surface. But it wasn't until divers went down in the submersible vehicle Alvin that they saw hydrothermal water streaming from the seafloor beneath some of the masses of tubeworms.

"That really set us wondering what kind of system we were looking at," said study researcher Lisa Levin, a marine ecologist at the Scripps Institution of Oceanography in La Jolla, Calif.

This spot on the Costa Rica margin — where the Cocos tectonic plate slowly creeps beneath the Caribbean plate — blurs the boundaries between hot hydrothermal vents and cool methane seeps, both of which support their own communities of life. The researchers dubbed the area a "hydrothermal seep." [Life at the Hydrothermal Seep (Video)]

"We sort of wanted to call it a 'veep,' which is halfway between a vent and a seep, but we weren't too sure whether that would go over well," Levin told LiveScience.

"In some places they went on as far as you could see, just a huge meadow," Levin said. "We're not used to seeing them in that configuration. There's clearly an amazing amount of food for them down there."

Symbiotic bacteria cling to the tubeworms, and mussels attach to the base of the tubeworm bushes. Limpets piggyback on the mussels. Meanwhile, little vent fish called zoarcid fish dart around the shelter of the worm clusters.

The largest tubeworm bush, nicknamed "The Volkswagen," is nearly 8 feet (2.4 meters) in diameter and contains an estimated 14,770 individual worms, the researchers report today (March 6) in the journal Proceedings of the Royal Society B.

The researchers also observed shrimp, as well as snails and other gastropods, including 23 species that have never been described by science.

Though the Costa Rican margin spot is unusual in blurring the vent-seep boundaries, Levin said there are likely many other spots like it in the deep ocean. Oil and gas drilling as well as bottom-trawling fishing methods threaten to destroy these habitats before science gets a chance to study them, she warned.

"It's just so astounding because the paradigm for the deep sea is that there's hardly any life down there and that it's like a desert," Levin said. "That is just the opposite. It's like a garden in these places."