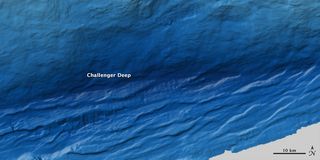 This image of the Challenger Deep in the Mariana Trench, the deepest spot on Earth, was made using sound waves counched off the sea floor. Darker blues represent deeper spots.
(Image: © NASA/UNH Center for Coastal and Ocean Mapping/Joint Hydrographic Center)

Sound waves have allowed scientists to peer through the dark ocean depths and create a new map of the deepest spot in the oceans: the Challenger Deep in the Mariana Trench.

The new map has a resolution of 100 meters (about 330 feet) per pixel, nearly 20 times more detailed and precise than previous efforts.

Researchers from the Center for Coastal and Ocean Mapping/Joint Hydrographic Center at the University of New Hampshire used what are called multibeam echo sounders to map the Mariana Trench from August to October 2010.

The Mariana Trench stretches 2,500 kilometers (1,500 miles) in an arc that is edged by islands such as Guam and Saipan. Its deepest point is known as the Challenger Deep, some 35,756 feet (10,890 meters) — or nearly 7 miles (11 kilometers) — beneath the surface of the sea. The trench is deeper than Mount Everest is tall.

"Titanic" director James Cameron dove down into the Challenger Deep on March 26, only the second time in history man has visited the place. The dive took two hours and 36 minutes and has renewed interest in the exploration of the deep ocean. The first — and until Cameron, only — trip to this spot was made on Jan. 23, 1960, in a submersible called the Trieste.

The new map of the trench shows depths in a series of shades of blue, with the darkest blues representing the deepest depths. Nearly 154,000 square miles (400,000 square km) of seafloor were surveyed by the oceanographers to make the map.

The multibeam echo sounders were mounted to the hulls of ships, from where they sent out pulses of sound waves toward the seafloor and then recorded the reflections. The longer the reflection took to come back to the instrument, the deeper the section of seafloor it bounced off of.

The sounders send out the pulses in a fan shape, allowing for the construction of 3D maps.

The new mapping effort also found four deep-water "bridges" crossing the trench and standing as much as 8,200 feet (2,500 m) above the trench floor. These bridges were once seamounts (mountains on the ocean floor that don't reach the water's surface) that were carried across the ocean floor by the spreading of the plates on which they sit. As plates (in this case the Pacific and Philippine plates) converge, some of the seamounts collide with features on the opposite trench, creating the bridges.