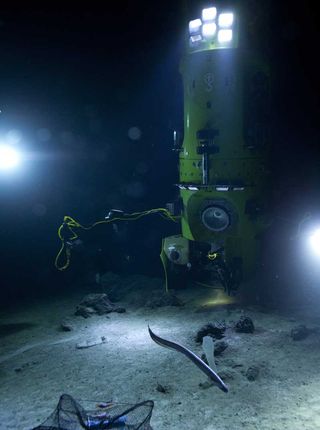 James Cameron's record-breaking dive to the bottom of the Mariana Trench has received accolades from many quarters, and perhaps none are louder than those who might one day actually use the technology the filmmaker and explorer developed to plunge to the Earth's deepest place.

Today (April 12), in an editorial published in the journal Science, two seasoned researchers added a voice to the chorus, praising not only Cameron's trip aboard his magnificent lime-green machine, but discussing the possibilities for research it has opened, and the practical offerings that may lie hidden at the bottom of the sea.

"What Cameron did was to develop a vehicle that could routinely take us to literally over a third of the depth of the ocean that we really haven't been able to explore in any detail," said Richard A. Lutz, an author of the editorial and director of the Institute of Marine and Coastal Sciences at Rutgers University.

Lutz pointed out that although robots have made the journey to the Challenger Deep, 35,756 feet (10,890 meters), or nearly 7 miles (11 km) beneath the sea's surface, and even brought back sediment samples for study, those dives didn't resonate the same way. [See photos from Cameron's historic dive ]

"It's man's presence that captures the imagination of the public," Lutz told OurAmazingPlanet.

Other scientists who have spent their careers researching the deep ocean agreed. Although they said that deep-diving robots have their own advantages — they have far more stamina than humans do, for instance — human-driven submersibles have an intrinsic value, and not just as vehicles of inspiration. There are scientific reasons to send humans into the deep, they said.

"You can react to things that aren't in front of the camera," said Mike Vecchione, a biologist with the National Oceanic and Atmospheric Administration and the Smithsonian Institution, who was not an author of the editorial.

Vecchione recalled one of his own dives aboard Mir, a Russian submersible. During a transect of the ocean floor, he spied something far off in the distance through the porthole. "I got the pilot to go after it, and it happened to be one of my animals — a dumbo octopod," Vecchione said. "So there are unquestionable advantages in manned exploration."

"Two human eyes connected to the best portable computer in the world are an extraordinary exploration device," said Bruce Robison, a senior scientist at the Monterey Bay Aquarium Research Institute in California and another veteran of deep-sea research.

"Some things are better done by a human, other things can be done more efficiently and more effectively robotically," he said. "You should use the best tool for the job."

Lutz also said that exploration of the deep sea should expand to some of the other deep trenches in the world's oceans, a point echoed by his colleagues.

"The paradigm right now is that trench environments are biologically isolated from one another," said Cindy Lee Van Dover, director of the marine laboratory at Duke University's Nicholas School of the Environment.

"Species we find living in the Challenger Deep may be quite different from what lives deep in the Puerto Rico Trench," Van Dover told OurAmazingPlanet in an email.

"The trenches are relatively young geologically, and present an even more challenging habitat to those organisms that survive there than some other areas of the deep sea," Osborn said in an email. "Animals surviving there now would have originated in shallower water," she said. "Tracking where they have invaded from and what has changed since they arrived in the trenches would be very interesting."

However, many scientists say it's not just the ocean's trenches that warrant further exploration. "My perspective is we haven't explored most of the planet," Vecchione said.

The deep sea — roughly defined as everything below 650 feet (200 m) — comprises a stunning 240 million cubic miles (1 billion cubic kilometers) and more than 90 percent of the living space on the planet, and it is virtually unexplored.

"People refer to the deep sea as an extreme environment, and it's not extreme. Most of it is the typical environment on the Earth — it's just not typical for us," Vecchione said. "It's more important to explore places like trenches than it is to explore other planets. We're on this planet and we need to know what's going on in our own backyard."

This story was provided by OurAmazingPlanet, a sister site to LiveScience. Reach Andrea Mustain at amustain@techmedianetwork.com. Follow her on Twitter @AndreaMustain.Follow OurAmazingPlanet for the latest in Earth science and exploration news on Twitter @OAPlanet and on Facebook.