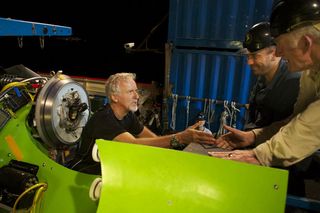 Filmmaker and National Geographic Explorer-in-Residence James Cameron gets a handshake from ocean explorer and U.S. Navy Capt. Don Walsh, right, just before the hatch on the DEEPSEA CHALLENGER submersible is closed and the voyage to the deepest part of the ocean begins.
(Image: © © Mark Thiessen/National Geographic.)

James Cameron's record-setting dive to Earth's deepest spot has sparked a wave of excitement among many in the science community, who are not only heralding the new technology produced by the Hollywood veteran but lauding the renewed focus the project has put on the deep ocean.

"It's wonderful, absolutely wonderful," said Robert J. Stern, a geoscientist at the University of Texas at Dallas. He is one of several deep-sea researchers who said they'd been closely following Cameron's bid to return human observers to the Challenger Deep, a trough within the Mariana Trench more than 35,000 feet (10,700 meters) below the ocean surface.

Cameron's roundtrip earlier this week to the deepest place on Earth lasted just under seven hours. The only previous time humans visited this spot was in 1960.

All three scientists have spent many hours aboard some of the few deep-diving research submersibles on Earth and said they hoped Cameron's technology eventually will prove a boon to researchers wishing to collect samples and perhaps even conduct experiments in the deepest reaches of the sea, a place that until now has been off-limits to humans.

"This establishes that the technology exists to allow that to happen, so we shouldn't constrain our thinking about approaching work in that extreme habitat," Robison told OurAmazingPlanet. "This is a technological breakthrough and a huge accomplishment on Cameron's part, and I'm very pleased that he's done it; but let's hope it opens the door for more."

Cameron's team hasn't confirmed what (if any) samples the filmmaker and explorer retrieved from the Challenger Deep during his three-hour seafloor sojourn. The sub is equipped with a sampling arm, among other research tools. However, Cameron did describe a bleak view through the windows of his lime-green submersible.

"It looked like the moon," Cameron told National Geographic reporters upon his return to the surface world. [See photos from Cameron's historic dive ]

For scientists, such an assessment was hardly discouraging.

"I was rooting for him to land and find strange-looking animals," Van Dover said, but she added she wasn't surprised. She said the seafloor is vast, conditions are harsh, and life is likely sparsely spread.

"Three hours is just a drop in the bucket, and with more hours I think he's going to discover cool things," Van Dover said. "How many years have we been studying the ocean? And it took until 1977 to discover hydrothermal vents." Van Dover specializes in researching the strange creatures that congregate around the seafloor vents, which spew super-heated water laced with trace chemicals that sustain the animals.

Robison, a veteran deep-sea ecologist, said that whatever does live in the trench, which is nearly a mile deeper than Mount Everest is tall, will be of great interest to scientists.

"Anything that has adapted to thrive in that habitat is going to have some really remarkable adaptations," he said. "But most of the animals in the ocean don't live on the bottom, so there's an enormous potential for discovery up off the bottom as well."

Stern said he would love to get his hands on rock samples from the Mariana Trench — the region is a subduction zone, an intersection of two tectonic plates where one plate is diving beneath another.

"To me the exciting thing is to see so deeply into the Earth. The rocks on the inner trench wall allow an unparalleled look into Earth's mantle," he said "There is nowhere else on the planet where we could look so deeply into our planet's solid interior."

Even without geological samples to study, the recent landmark dive is a scientific milestone, Stern said. Not only is Cameron's submersible a completely revolutionary design, but the project has produced a less tangible, yet very beneficial effect: Cameron has galvanized public interest in the deep ocean.

"One of the problems we have as scientists is reaching the public, and he's smashed through that barrier like no scientist could," Stern said.

Both Stern and Van Dover said that engagement alone could pay huge dividends down the road.

"I wonder if a lot of young people are watching this, and if now there will be a whole bunch of kids who want to be engineers and deep-sea scientists. ? don't know if that's true, but that's what I hope," Van Dover said.

"It's one of those moments that captures the imagination," she added.