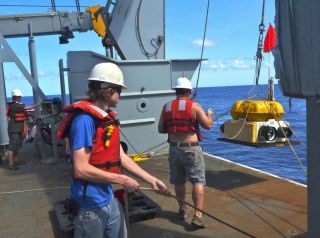 Researchers prepare to drop a seismograph off the side of a research vessel to the ocean floor 18,000 feet below, near the Mariana Trench. The instrument will stay in place for a year, using rumbles from distant earthquakes to create a picture of the Earth's interior.
(Image: © Doug Wiens. )

Getting to the Mariana Trench, the deepest place on Earth, has captured humanity's imagination for decades — even more so in recent weeks, with news that director James Cameron is on the verge of taking only the second trip in history to the mysterious darkness nearly 7 miles (11 kilometers) beneath the ocean surface.

Yet some scientists are trying to delve deeper still, albeit by means of technology very different from Mr. Cameron's magnificent machine. They are trying to look at the geological makeup of the Earth's insides deep beneath the Mariana Trench in search of a few pieces to an epic puzzle: How does water move from the Earth's crust to its interior?

"We still don't actually know how that happens," said seismologist Daniel Lizarralde, an associate scientist at the Woods Hole Oceanographic Institution in Massachusetts.

Research indicates that water is what allows the Earth's mantle, a colossal layer as rigid as steel, to stay viscous. And scientists know that water comes out of volcanoes — a conduit for material to the surface world from the Earth's innards — another telltale sign there's water in the mantle. It's just not clear how it's getting all the way down there.

The Mariana Trench provides a great venue to test such a question. It's a subduction zone, the boundary of two tectonic plates, where one plate is slowly diving beneath the other.

"The Pacific Plate is bending and plunging down into the Earth, and as it bends it cracks," Lizarralde told OurAmazingPlanet.

Some scientists hypothesize that if those cracks extend between 4 and 6 miles (6 and 10 km), deep enough to reach the mantle, they could be the conduit for water to reach the Earth's interior, said Doug Wiens, a professor of earth and planetary science at Washington University in St. Louis. [Infographic: Tallest Mountain to Deepest Ocean Trench]

Lizarralde and Wiens, along with a team of other scientists, recently completed some of the initial field work for a project aimed at testing this hypothesis. They set out a grid of sensors over a portion of the Mariana Trench to listen for the way sound travels through the underlying rock, which will allow them to construct a kind of CAT scan of the geological structure of the area.

If they see evidence of a particular mineral called serpentinite — a mineral created when water reacts with another mineral commonly found deep in the Earth — the team may have tracked down the delivery system that injects water into the mantle.

Water can't simply hitch a ride to the Earth's interior aboard any ordinary rock. If the rock is too flimsy, the crushing pressure and heat in the Earths' crust will essentially squeeze out all the water before it gets anywhere near the mantle. But serpentinite's crystal structure provides a kind of hard, mineral suitcase for water molecules, allowing them to pass through the heat and pressure of the crust, and reach the mantle unscathed.

When all the data have come in, by early 2013, the scientists say they will eventually be able to map a good part of the geological makeup beneath the Mariana Trenchto a depth of about 60 miles (100 km).

Both scientists said they are looking forward to seeing their results and finding out what they mean for understanding the movements of the inner Earth and the shifting of the planet's tectonic plates.