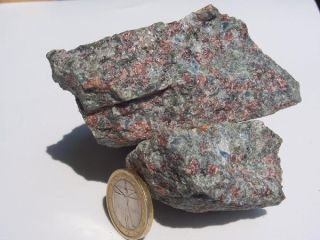 MINNEAPOLIS Slow-motion continental collisions many millions of years ago produced some long-lived clues that shed light on the history of ancient tectonic violence, and scientists who study the rocky by-products left behind met this week to discuss their research.

At the meeting of the Geological Society of America here this week, researchers who focus on eclogites colorful, ancient rocks have learned new details of the cyclical geological journey these durable rocks make.

Eclogites, which are found in only about two dozen spots around the globe, spend time in the high-pressure, high-temperature furnace of the Earth's mantle, but escape relatively unscathed.

Adding to their exoticism, the rocks take a (very, very long) round trip, which makes the red-and-green eclogites a handy tool for studying the large-scale mechanisms that govern the Earth's periodic tectonic makeovers , according to Andrew Kylander-Clark, a research scientist at the University of California, Santa Barbara.

"We're learning how the continents were constructed and how they've continued to evolve through time, and what they might look like in another 100 million years," Kylander-Clark told OurAmazingPlanet.

Journey to the mantle

Eclogites originate fairly close to the Earth's surface, some 6 miles (10 kilometers) down. The monstrous force of continental head-on collisions shoves them deep into the planet, 60 miles (100 km) or more; then, by way of more continental jostling, the eclogites are returned to the Earth's surface, but with signatures from the deep that tell the tale of their wanderings.

Kylander-Clark, who focuses on eclogites from Norway, said that by using lasers to analyze different minerals present in the rocks, scientists can track an eclogite's travels through time.

The Norwegian eclogites are extremely old. It appears they began their descent into the mantle around 425 million years ago, when the region was the site of a continental collision, and were back on the surface by 380 million years ago.

However, Kylander-Clark said, recent research has shed light on the particulars of their journey, suggesting that eclogites spend a lot more time in the mantle than previously thought about 25 million years.

"We thought they couldn't be there for very long," Kylander-Clark said, since it was thought if the ecolgites hung around so long, the inhospitable conditions in the mantle would obliterate them before they could make the return trip to the surface.

And although the eclogite-shoving in Norway cooled off around 380 million years ago, when continental collisions in the region ground to a halt, eclogites of a variety of ages are scattered around the globe.

Cross-section of a collision

In fact, a current continental collision is home to some of the Earth's youngest eclogites. In the Himalayas , which are forming as the massive Indian tectonic plate is crashing into and being dragged under the Eurasian plate, eclogites some 50 million years old and younger are found.

Kylander-Clark said scientists hope that study of these hardy, well-traveled rocks will help increase understanding of the forceful interplay between our planet's massive tectonic plates, its interior and its surface.

"What we're trying to construct is a cross-section throughout time of what rocks are doing when and where during a collision," Kylander-Clark said.