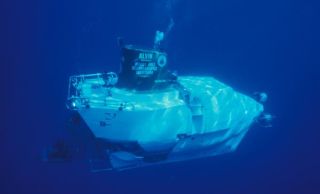 SAN FRANCISCO A U.S. Navy-owned submarine that located a lost hydrogen bomb and scouted the wreck of the Titanic is getting a $40 million makeover to go deeper than ever before. But first things first: Some interior redecorating will allow the submarine's occupants to observe deep sea life without holding yoga-like positions for hours on end.

Once fully renovated, the submarine Alvin will be able to dive 21,000 feet (6,400 m) below the surface and reach 98 percent of the seafloor , as opposed to the 66 percent that it can reach now. That would grant researchers a nearly all-access pass to the mysterious depths inhabited by much of the life on Earth.

One of those researchers is Susan Humphris, a veteran of more than 30 dives to observe hydrothermal vents and undersea volcanoes in the old version of the submarine Alvin. She works as senior geologist at the Woods Hole Oceanographic Institution in Woods Hole, Mass.

"You've got to have your head right against the porthole and you're sitting just on the floor, so you're in these contorted positions for hours," Humphris explained. "It's just uncomfortable, it's very uncomfortable."

Humphris spoke to OurAmazingPlanet after a press conference at the 2010 fall meeting of the American Geophysical Union yesterday (Dec. 15). Researchers discussed the upgrade plans for Alvin and a new robot submarine slated to explore beneath the Antarctic ice .

Life in the water

Alvin's extended range should open up much of the deep sea that is crucial for better understanding Earth's climate, ecosystems and the sustainability of fisheries, according to Peter Girguis, a marine biologist at Harvard University.

"One thing that's easy to forget is that 80 percent of our biosphere the part habitable by life is ocean that's deeper than 1,000 meters [3,281 feet]," Girguis told reporters at the press conference.

The abundance of marine creatures means that scientists regularly discover new exotic species in the deep sea. Yet they may have barely scratched the surface of what lies beneath.

He recalled his students at Harvard wanting him to put a figure on the number of species that might exist. Instead, he suggested that they follow a path to become deep sea explorers a career that could very well land them a seat aboard Alvin someday.

The current Alvin setup requires scientists to give up comfort for undersea trips that last eight to 10 hours inside the submarine's personnel sphere. A pilot perches on a small metal box to drive the submarine, while two science observers sit on the floor and press their faces against viewports the size of teacup saucers.

But the upgraded personnel sphere will have five larger portholes with more overlapping fields of vision, so that the scientists can see some of what the pilot sees. Occupants can also sit, kneel or lie flat on adjustable benches within the 20 percent larger space.

"We've been putting scientists inside to test it," Humphris told LiveScience. "We had a survey of the community and had over 100 responses as to how they'd like to be able to position themselves."

A mockup of the upgraded sphere was even available in an exhibit hall at the meeting, where researchers clambered inside to try out the roomier setup for themselves.

The first stage of renovations also includes better lights and a high-definition camera system, as well as a doubling of Alvin's payload-carrying capacity to 400 pounds (180 kilograms). Robotic arms operated by the pilot are also getting extended, so that Alvin can use its longer arms to keep vents and volcanoes at safer distance while getting close-up images.

The submarine just ended its service in the Gulf of Mexico, where it was helping assess the impact of the Deepwater Horizon oil spill on deep-sea corals. Now it's slated to undergo the first stage of modifications with a target completion date of spring 2011, so that it can resume duties in 2012.

The trickiest part comes during a planned second stage of the upgrade that will allow Alvin to survive at a depth of 21,000 feet (6,400 m). The sphere will need 3-inch-thick (7.5 centimeters) titanium walls to resist the deep sea's crushing pressures, which can reach 650 times what humans feel on the Earth's surface.

The second stage upgrade won't be laid out until National Science Foundation funding becomes available over the next several years. Once completed, it would allow Alvin to operate at the same depth as another Woods Hole inhabitant a remotely operated vehicle called Jason that dives while tethered to its command ship.

Alvin and Jason may never work together because of lack of space aboard ships, but they already work in tandem with smaller autonomous underwater vehicles such as the robotic Sentry.

"I think the future of deep submergence is having vehicles operating together," Humphris said.

Jeremy Hsu is a Senior Writer for LiveScience, a sister site of OurAmazingPlanet. You can follow him on Twitter at @ScienceHsu.