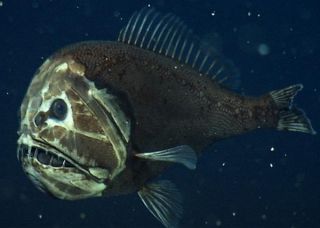 Dive beneath the ocean's waves, past the sunlit, teeming waters near the surface, through the oxygen-deficient zones nearly devoid of life, down, down and down some more, to a place where the pressure would crush a human, and you will find the mysterious, alien world of the deep sea.

It is 300 times the size of the space inhabited by Earth's land-dwelling species. It is unimaginably cold and cloaked in near-total darkness. Yet the blackness is alive, swarming with untold armies of fantastical creatures.

Some are laughably large, some shoot shimmering sprays of light from their bodies, still others are outfitted with menacing frippery befitting a sinister Dr. Seuss book.

Despite the fact that this alien world is relatively accessible compared with the planets even in our own solar system, the deepest depths of the ocean remain virtually unexplored the final, mysterious frontier of our home planet.

Although the deep sea roughly defined as everything below 650 feet (200 meters) comprises a stunning 240 million cubic miles (1 billion cubic kilometers) and more than 90 percent of the living space on the planet, scientists are still trying to answer the most basic questions about it.

"Basically, we know so little about the deep sea that we don't know what we don't know. A lot of things are still being discovered purely by chance," said Michael Vecchione, a biologist with the Smithsonian Institution, and one of the few people who have actually been there.

But the deep sea is getting more attention these days, thanks to interest from several well-funded parties in sending humans to the deepest spots on Earth aboard a crop of newfangled submersibles. British tycoon Richard Branson's Virgin Oceanic effort may be the best-known of the privately funded endeavors, while countries such as China are also showing interest in the oceans' most inaccessible places, albeit for different reasons.

In 2003 Vecchione descended aboard a Russian submersible to the Charlie-Gibbs Fracture Zone, a gash in the mid-Atlantic seafloor that is 14,760 feet (4,500 meters) at its deepest.

To put that in context, the ocean's average depth is 13,120 feet (4,000 m), the height of many peaks in the Rockies and the Alps. [Infographic: Tallest Mountain to Deepest Ocean Trench ]

Vecchione and other scientists who study the deep sea say one of their biggest challenges is trying to figure out what exactly lives down there.

Although the Census of Marine Life , a decade-long international study, uncovered more than 1,200 new species (excluding microbes) in the planet's oceans, the study also highlighted just how much humans still have to learn about the deep ocean in particular.

"There must be many animals, possibly large animals, down there that we don't know about," said Edith Widder, CEO and senior scientist at the Ocean Research and Conservation Association.

Over the last several decades, scientists have found some bizarre and massive creatures dwelling in the deep, such as the megamouth shark, a filter feeder that grows up to 18 feet (5 meters) long. Only dozens have ever been seen since they were discovered in the 1970s .

"When they were first discovered, it was a complete surprise nobody knew they even existed," Vecchione told OurAmazingPlanet. Within the last 10 years, two large squid species have been found, he said, "and there are other large things in the deep sea we've gotten glimpses of but have never caught, so we don't know what we're going to discover."

Both Vecchione and Widder study the biology of the open waters of the deep ocean, known to researchers as the water column a region even less explored than the ocean floor, and whose inhabitants are more difficult to find.

"Stuff that's on the bottom, some of it moves, but not very fast, and a lot of it is just stuck in one place," Vecchione said. "But in the water column, things move around."

And, Widder said, those things can outrun a researcher's trawling net.

Until the relatively recent development of manned submersibles and remotely operated seafaring robots, nets were one of the few tools available to scientists trying to sample life from the darkness of the deep.

And those nets missed more than just fast-moving animals like squid. They missed an entire class of creatures that appear to be one of the dominant life forms in the deep sea, a finding scientist Bruce Robison called "one of the biggest discoveries we've made in the last 10 years or so."

"It's not until we started going down there that we realized, 'Holy cow! There's an astonishing number of gelatinous animals down here,'" Robison, a senior scientist at the Monterey Bay Aquarium Research Institute, said in an interview.

The deep ocean is a weird universe of jellyfish and their relations, sometimes forming chains many feet long, often lit by shimmering flickers of bioluminescence. It turns out they account for a whopping 25 percent of the biomass in the deep.

"Maybe more," Robison said. "But we didn't know that, because if you drag a net through deep water, any of these gelatinous animals are shredded they either turn into so much goo or pass through the net."

Robison said that in addition to figuring out what lives down there, scientists are also trying to figure out how things live down there how nutrients move from the surface world down into a vast system that is cut off from the reach of the sun. (Very little sunlight penetrates beyond about 650 feet deep, or 200 meters. Below about 3,300 feet, or 1,000 meters, it is totally dark.)

"We don't know what the food web is like," Robison said."We don't know how that organic material transfers through the immense food web down to the deep sea floor we know it goes from the beginning to the end, but as to how it gets there we're still in the dark, literally and figuratively."

To survive and communicate in the perpetual twilight or permanent night of the deep whether to find food, find a mate, or stave off an attacker many of the inhabitants make their own light. Bioluminescence is Edith Widder's specialty, and she says scientists are only beginning to understand what she calls "this language of light."

Given the sheer volume of the deep sea, Widder said, a huge proportion of the animals on our planet are bioluminescent, and yet little is understood about the myriad ways organisms use self-made light. Widder says she feels very fortunate to have witnessed the spectacular underwater shows for herself.

"It's magic," she told OurAmazingPlanet. "It's Harry Potter stuff to have these explosions of light all around you these pinwheels of light. It's absolutely breathtaking, and of course the more you know about it, the more exciting it is you can recognize animals by their display."

Although it may lack the aesthetic thrill of deep sea biology (who can resist a fragile creature that can squirt light in the path of a lunging squid?), many scientists are also looking to the deep sea to try to solve some big questions about the role it plays in Earth's climate.

Figuring out how temperature changes move through the deep ocean has implications for ocean dwellers and land dwellers alike. [Related: Which Creatures Will Thrive In Warmer Oceans?]

"In order to predict how much and how fast the Earth is going to warm in the future due to changes in greenhouse gas concentrations and other changes, we need to know how much energy it's taking up now," Johnson said. "That's a very important constraint for predictions. And the oceans take up the vast majority of the heat."

Scientists depend on ships and, to some extent, a growing but still comparatively tiny network of ocean buoys to take measurements of conditions in the deep ocean everything from temperature to salinity (salt content ) and water chemistry.

"We are so observationally limited right now," Johnson said. "It is still very much a time for exploration and discovery."

And because so little is known about the deep ocean and the mechanisms that govern it, the possibilities are rife for grand discoveries. One overarching question confronting deep-sea scientists across many disciplines concerns the ingredients and mechanics of our planet as a whole: How does what we do up here affect the deep oceans, and how do the deep oceans affect things up here?

"In many very real ways, the deep ocean is like the flywheel on the engine of the planet. It dominates organic carbon flux on Earth . And the magnitude of it is so great that I think we fail to appreciate it," said MBARI's Robison. "But if we start tampering with it,and clearly we are, then we could see some very big changes in the part of the planet where we live."

Cindy Lee Van Dover, a marine scientist and professor at Duke University, said that the way carbon is cycled by the animals that live in deep oceans is of great importance. It affects the chemistry of the deep, which affects the oceans in general, which affects the atmosphere and vice versa.

"The deep sea, the ocean, the atmosphere we're still trying to figure out how all those are connected," Van Dover said.

Grand ambitions of a unifying theory aside, scientists at this point are still just trying to figure out what is there, she added.

"It's as fundamental as Lewis and Clark going out and mapping out habitats west of the Mississippi and they had the advantage of being able to see things," Van Dover said. "I don't want to exaggerate, but I think we're in that phase of exploration. The Yellowstones are still out there to be discovered."

Vecchione agreed: "We're still exploring in space, and we should still be exploring in the deep ocean as well."

More humans, 12 in all, have walked on the moon than have traveled to the deepest parts of our own planet.

Only two have the distinction of visiting the very deepest spot on Earth, the Challenger Deep in the Mariana Trench , which lies 36,200 feet (11,030 meters, or nearly seven miles) beneath the surface of the western Pacific Ocean. In 1960, U.S. Navy Lt. Don Walsh and Jacques Piccard, a Swiss native, rode a massive metal vessel to the seafloor and spent 20 minutes in the darkness there.

To this day, humans haven't returned.

Although exploration for the sake of exploration is important, many scientists say that the stakes for understanding what happens in the deep are high for everyone not just for billionaires with a penchant for exotic travel or nations with an eye on the resources in the deep sea.

"We don't know enough about how the ocean works to be able to predict stuff," Robison said. "That's why I think we need to keep studying the deep sea and the sea in general, because there isn't any question that we're changing things and changing them profoundly and rapidly. And if we do that without being able to predict the consequences, that's not very bright."