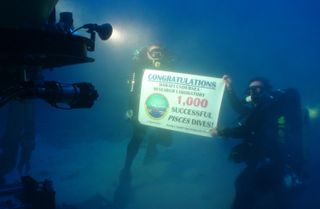 Marine scientists recently celebrated the 1,000th dive of one of their twin manned submarines off the coast of Hawaii.

Scientists from the University of Hawaii and the Hawaii Undersea Research Laboratory (HURL) have now spent nearly 9,000 hours underwater around the Hawaiian Islands and U.S. Pacific territories since 1981, studying marine creatures.

This dive was a tad more crowded than normal. Nearly 500 students from more than 35 classrooms "virtually" accompanied the researchers.

During the dive, HURL researchers used their three-person submersible, named Pisces, to study coral reefs that occur in the deeper half of sunlit waters, called mesophotic reefs. Near Hawaii, these elusive corals live about 230 to 500 feet (70 to 150 meters) underwater. [Infographic: Tallest Mountain to Deepest Ocean Trench]

The submersible dove in the 'Au'au channel, off the island of Maui, during the mission. HURL operates Pisces IV and V, deep-diving submersibles capable of descending nearly 6,600 feet (2,000 m) below the water's surface.

"My second-grade class is so excited to be part of this amazing virtual tour. We are grooming future scientists and with this experience I can see that your team has sparked the interest in my students," said Yvonne McCarty, a teacher at Felicita Elementary School in Escondido, Calif., whose students dove virtually. "Thank you for letting us set sail aboard with you. And congratulations on the 1,000 dives. Way to go!"