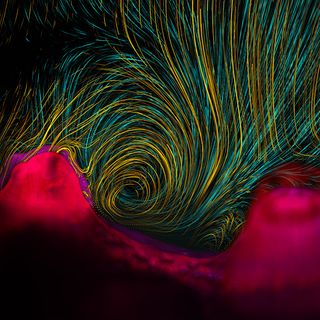 This striking photograph shows just how active are the ocean’s reef-building corals. Scientists from MIT and the Weizmann Institute of Science captured the way in which cilia  — tiny hair-like projections on the surface of corals — create unseen currents as they wave back and forth in the water, helping to take in nutrients and move out waste.

To create the award-winning image, the researchers used a video microscope, multiple image exposures and digital photo production. Vicente Fernandez, who works in the lab of Roman Stocker at MIT, and Orr Shapiro, who works in the lab of Assaf Vardi at the Weizmann Institute and was visiting MIT at the time of this work, first placed fragments of "cauliflower" coral (Pocillopora damicornis) under a microscope. Then they recorded two short videos 90 minutes apart. For each video, they superimposed successive frames to produce a multi-exposure image revealing the movement of particles in the cilia-generated current. Finally, they merged the two multiple-exposure images and added color, using as inspiration the colors Pop artist Andy Warhol used to make his famous ‘Marilyn’ diptych. The pink “hills” on either side of the vortices are the two coral polyps spaced 3 mm, or .12 inches, apart.  The purple shows the polyps’ movement. The gold and cyan show the flow patterns at the two different times.

The researchers did the visualization, which is titled “Invisible Coral Flows,” while studying how coral engineer their environments. "Our finding has changed the way we think of corals — from passive entities dependent upon external flow, to active engineers of their own microenvironment," Shapiro said. “Seeing is believing,” added Stocker, “and it is really exciting to use technology to see the unseen in nature, particularly when it ends up being so aesthetically beautiful and ecologically important.”

The photo took first place in the photography category of the 2013 International Science and Engineering Visualization Challenge  —#SciVis—sponsored by the National Science Foundation and the American Association for the Advancement of Science. It appeared on the cover of the Feb. 7 issue of Science.

Note: NSF and Science will begin accepting entries for the 2014 “SciVis” challenge in September.