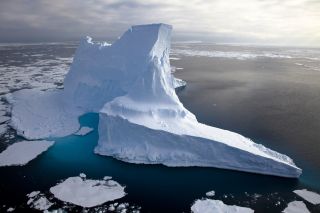 Antarctica's melting glaciers launched so many icebergs into the ocean 14,600 years ago that sea level rose 6.5 feet (2 meters) in just 100 years, a new study reports. The results are the first direct evidence for dramatic melting in Antarctica's past — the same as predictions for its future.

"The Antarctic Ice Sheet had been considered to be fairly stable and kind of boring in how it retreated," said study co-author Peter Clark, a climate scientist at Oregon State University. "This shows the ice sheet is much more dynamic and episodic, and contributes to rapid sea-level rise."

Natural climate warming caused huge ice sheet collapses in Antarctica eight times in the past 20,000 years, according to the study, published today (May 28) in the journal Nature. Measurements at Antarctica's biggest glaciers, such as Thwaites and Pine Island, suggest the ice sheet is on the brink of a similar massive retreat. [Photos: Antarctica's Pine Island Glacier Cracks]

Antarctica's glaciers have been shrinking since the last great ice age ended about 22,000 years ago. This warming was triggered by wobbles in Earth's orbit, combined with warming boosts from the ocean and atmosphere, such as temperature increases from the release of carbon dioxide gas.

The last big iceberg release was 9,000 years ago, and the pace of glacial retreat slowed in Antarctica until the 20th century, when melting picked up again with man-made climate change. Current models suggest global warming has again tipped the Antarctic Ice Sheet into sudden, rapid shrinking.

But models that forecast the future of Antarctica's Ice Sheet based on its past behavior actually had little hard evidence for making comparisons until now, Clark said.

To find out how the ice sheet fared under natural warming conditions, researchers drilled deep into the Scotia seafloor between Antarctica and South America. They discovered sandy debris from eight iceberg surges in the past 20,000 years. Icebergs carry sand trapped in ice out to sea, and the sediment falls onto the ocean floor as the frozen chunks melt.

The biggest pulse of debris was 14,600 years ago, at the same time as a global sea-level rise of about 13 feet (4 m) within 100 years, said study co-author Axel Timmermann, a climate scientist at the University of Hawaii at Manoa. Because ice sheets in the Northern Hemisphere were melting at the same time, scientists think Antarctica's melting accounts for about half of this jump in sea level, he said.

When glaciers draw back, they drop icebergs that melt and raise sea level. Ice melting from contact with warmer seawater can also contribute to sea-level rise.

"The question has been, 'Where did this ice come from?'" Clark told Live Science. "This is the first clear evidence Antarctica did contribute to this sea-level rise."

The findings suggest that Antarctica's giant glaciers respond to a warming climate with pulses of quick withdrawal, rather than a slow and steady retreat. But the discovery does not answer one of Antarctica's biggest mysteries — what triggered the melting, and why did the glaciers stop their galloping retreat. Nor do researchers know which parts of the ice sheet were responsible for the icebergs, though they suspect it was primarily the Antarctic Peninsula and the Weddell Sea region.

Modeling suggests that the massive melting causes ocean circulation changes that prompt a feedback loop, letting warmer ocean water reach the ice, Timmermann said. "There is a positive feedback that can happen," he said.